In fact, data centers use nearly 2 percent of the world's supply of electricity at any given time, and 37 percent of that amount is used to keep computing equipment cool. Not only is this a drain on the power grid, but it also taxes water supply. A 15-megawatt data center can use up to 360,000 gallons of water a day — that’s more than half the water in an Olympic-size swimming pool.

Data center power consumption is on the rise, increasing 56 percent worldwide and 36 percent in the U.S. from 2005-2010. These substantial energy demands come at a price, and controlling operational costs in data centers has been a persistent challenge. IT systems are designed to ramp up and down based on a businesses’ use, yet cooling systems in data centers were not previously designed to do that.

Aligned Energy, an integrated technology platform, has developed a solution that eliminates infrastructure complexity and waste, heightens visibility and control, and improves reliability in data centers. One of Aligned Energy’s subsidiary companies, Inertech, set out to address the key drivers of cost in data centers. With 80 percent of a data center’s costs going towards the electrical and mechanical systems, Inertech determined that the only way to effect real change is to drive down the cost of the cooling system and electrical blocks.

Using Danfoss’ portfolio of products and application expertise, Inertech was able to develop a solution for scaling mechanical and energy infrastructure directly to servers and storage use, which has yielded enormous savings in water and electricity costs. 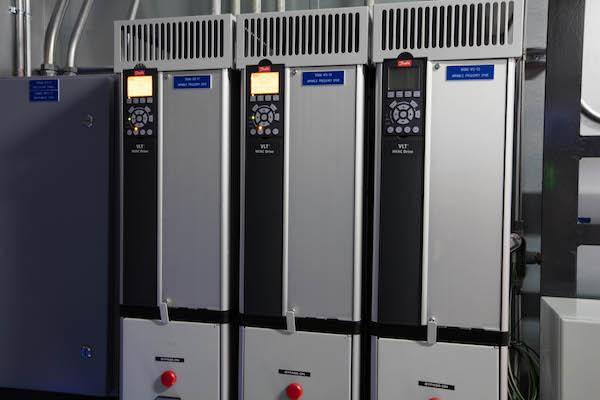 The majority of a data center’s upfront costs are in building chiller infrastructure. The average data center is constructed to a “perceived build” based on the anticipated IT capacity. Companies try to predetermine the size of chiller plants needed to support IT, however these calculations are highly complex and difficult to accurately predict. Often, companies significantly overbuild data centers from day one, unnecessarily inflating their capital costs.

Operators of existing data centers working under this model were spending nearly 85 percent of their capital expense upfront, but they were applying this capital towards equipment that was going unused. These operators would start up their IT kits, and learn that they were running a much lighter load than what they had built for.

Earl Keisling, CEO of Inertech, explained that, “IT systems are designed, like in the financial industry, to ‘follow the sun around.’ These systems are designed to support very high loads in a given area, whether it be Hong Kong, or the London stock exchange, but have to be able to support low loads as well. The problem with the original technology – these large chiller plants – is that they only work well when they're fully loaded, because that’s what they were designed for.”

Keisling added that when data centers are operating they never draw more than 60 percent of the wattage listed on the server name plate. “Therein lies the problem — that you designed a system for servers, and your utilization is only a fraction of what that name plate is.”

If companies overbuild their cooling systems, or install products they aren’t using, it is both operationally and fiscally inefficient. The lack of a supply chain model that scales products to requirements has fueled the perpetual repetition of this costly practice. 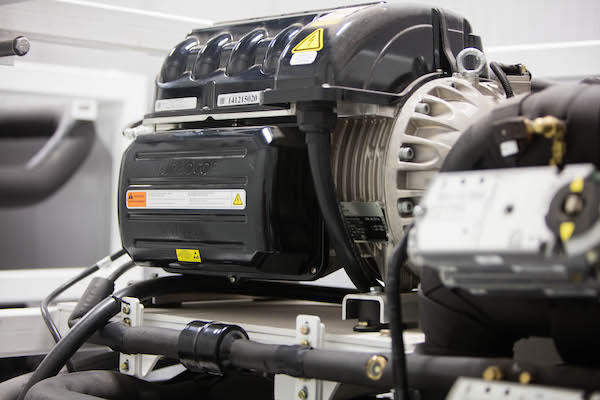 Using Danfoss products, Inertech’s patented model has been able to reduce 80-85 percent of the cost of starting a data center on day one. On the operational side, because Inertech’s cooling systems are 90 percent more efficient than a traditional chiller plant, it is able to drastically cut the electrical infrastructure that supports that data center for its customers.

Inertech did this by building a platform of small modular cooling blocks that can be scaled to actual IT use. It worked with Danfoss to identify critical components of the Danfoss portfolio that would enable Inertech to maximize efficiencies for energy and water use. The system design supports data center needs in a much more cost-effective delivery model than a traditional chiller plant, as the smaller platforms can be installed exactly when they are needed, or ‘just-in-time,’ without interrupting IT online operations.

Inertech’s cooling cycles were designed to be delivered modularly, both in the equipment, as well as in the physical infrastructure, enabling data centers to scale over time. Working in a supply chain of four to six weeks, Danfoss and Inertech deploy and hook up pre-assembled modular units to data centers based on their actual IT use, which has resulted in energy efficiency of 80-90 percent versus a normal chiller plant.

“We have utilized Danfoss’ [Turbocor™ compressor and heat exchangers] in our CDU’s [cooling distribution units] and in our Cactus Units,” said Keisling. “The Turbocor™ compressor we feel is by far the most efficient compressor that's on the market, and it fits very well with the just-in-time delivery and also the ability to go from very low loads to very high loads.” 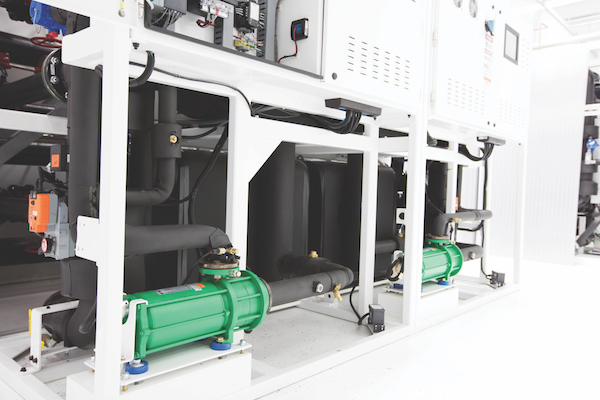 A traditional 10 MW data center would typically have 20 MW of power in order to have sufficient power to get the chiller plant back online in the event of a power outage. Modularizing the system with small Danfoss Turbocor™ blocks resulted in very low in rush, only using the compressors as needed, which reduced the electrical infrastructure required from 100 percent overhead down to 15 percent. This makes Inertech’s solution more reliable than any other system currently on the market, and less risky to data centers.

Inertech’s Cactus Units use about 80-85 percent less water than a traditional chiller plant. This particular unit also affords data centers the ability to run dry, providing added flexibility to compensate for the atmosphere and surrounding conditions.

“We’ve created efficiencies in both energy and space,” said Marcus Moliteus, vice president of sales and engineering at Inertech. “By doing that we can provide our clients with a modular chiller plant or cooler solution in 350-500kw modular blocks. We’ve worked closely with Danfoss to reduce amperage on the Turbocor™ compressor the way we apply it in our patented cycle, and by doing so have created efficiencies beyond what the original product intended.”

Separating the chiller plant into small modular blocks has enabled Inertech to operate each of the individual circuits to very high efficiency. When it comes to data centers, reliability is paramount. Inertech’s “use” model is an innovative approach to addressing overbuilding, underuse and inefficient cooling infrastructure in many data centers today. When prefabricated modular units are delivered to site for clients, “there is no on-site installation,” said Moliteus. “You literally land and connect onsite, and using the variable frequency drives (VLT™ Drives) helps in reducing the amount of energy and wiring on site. It allows clients to have quicker deployments in places where it is harder to find labor, as data centers can be in remote places. This is also beneficial because there is zero shut down time, so it doesn’t impact the running data center.”

The collaboration has enabled Inertech to create multiple efficiencies, reduce the overall environmental footprint and drive down costs for its customers. 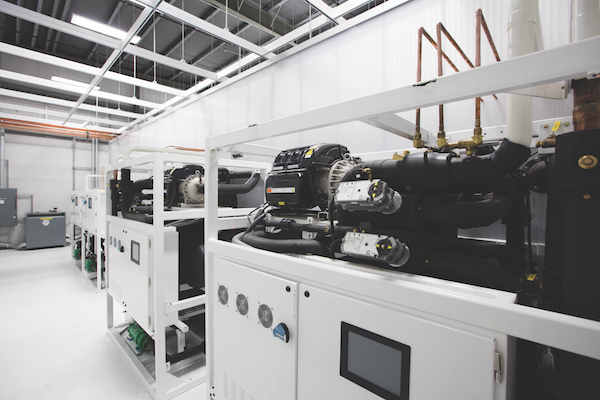 “When you come out with new technology in the data center business, the key and most important aspect in all of it has to be reliability,” said Keisling. “Inertech had to develop and use products that used best-in-class equipment in order to convince engineers and builders that this is for real.”

Despite getting involved with Lenovo late in the migration process, Inertech and Danfoss were able to quickly develop solutions for two locations, a high-density lab in Santa Clara, California and a facility in Raleigh, North Carolina.

With California facing one of the most severe droughts on record, Inertech devised a solution for Santa Clara that was able to operate the systems dry for most of the year, consuming 80 percent less water than a typical chiller system.

Both facilities now use 80-90 percent less power on the cooling infrastructure due to Inertech’s design, powered by Danfoss compressors, heat exchangers and drives. 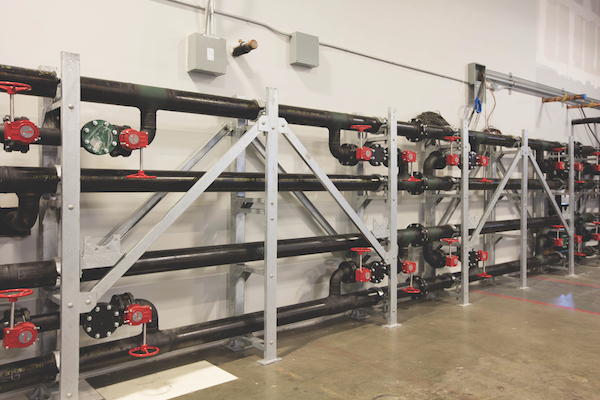 Many of the world’s data centers are moving into co-locations to control costs. In November 2015, Aligned Data Centers opened the first 300,000-square-foot data center with a power capacity of 30 MW in Plano, Texas, with another site slated for Phoenix, Arizona in 2016 that will add another 65 MW of capacity. These facilities offer a unique responsive data center model in the co-location space that is designed for real world server usage.

Using reliable products and expertise from Danfoss has enabled Aligned Energy and Inertech to create smart solutions that improve efficiency and lower energy costs in an industry that powers the future.

All photos courtesy of Danfoss. For more information, visit www.danfoss.com.