Field-erected evaporative “wet” cooling towers, combined with heat exchangers, are an economical and efficient method to dissipate large heat loads at oil and gas refineries and chemical processing plants – as long as they’re free of harmful debris. Yet many cooling towers at these facilities are highly susceptible to poor performance and costly downtime due to problems associated with debris buildup and potential for debris to pass by traditional stationary water screens during the cleaning process, clogging heat exchangers.

The Importance of Cooling Tower Efficiency

Evaporative cooling towers encountering issues with debris and found at chemical plants and refineries include counterflow and crossflow configurations, as well as natural-draft, induced-draft, and forced-draft towers.

A wet cooling tower uses an evaporation process in combination with shell-and-tube heat exchangers to provide cooling water to processes within the plant. The tower also typically includes one or more water screens installed in the cold-water basin at the bottom of the tower. The screens filter out large debris, in turn, protecting pumps, heat exchangers and downstream systems by filtering out debris that finds its way into the cold-water basin.

The efficiency of cooling towers is critical to maintaining production given the large-scale heat transfer necessary to provide cooling water to the plant. Of the utmost importance is optimal performance of the cooling process within the heat exchanger since it plays a vital role in the overall tower cooling cycle.

With a shell and tube heat exchanger, cold water flows through a set of metal tubes while a second heat transfer fluid passes through a sealed shell surrounding them, allowing heat to pass from one fluid to another. If the cooling water from the cold-water basin contains debris that is larger in diameter than the diameter of the heat exchanger tubes used for cooling water circulation, the debris can obstruct the flow of the cooling water and diminish the device’s ability to transfer heat. The volume and type of debris in the water will determine the severity of the problem. As debris continues to build up and obstruct the flow rate of cooling water through the heat exchangers, the more severe the problem.

When cleaning stationary water screens on cooling towers, debris is commonly pulled into the tower’s recycling pump and on to the tower’s heat exchanger.

The volume and type of debris entering a cooling tower basin is directly impacted by the age and condition of the cooling tower. Towers with the highest risk are aging towers that are 15 or more years old, as well as damaged towers. In aging or damaged cooling towers, larger fragments of wood, plastic or other material are more prone to come loose and fall into the cold-water basin.

Also impacting the severity of the debris problem is the environment around the tower. Debris problems are the result of a variety of debris sources, such as cotton wood tree fuzz, leaves, bugs, and pieces of trash. It’s not uncommon for natural debris to be pulled into the cold-water basin by the force of the fans located at the top of induced- and forced-draft towers. New towers operating in clean environments are less likely to encounter problems with debris.

Whether the source of debris is from the tower or the environment, the severity of the problem impacts the speed in which the efficiency of the cooling system degrades. In turn, the faster cooling system efficiency degrades the more the problems associated with manufacturing processes accelerate. Problems can range from higher cooling tower power usage to compensate for reduced flow rate to the need to slow production to account for a “problem” in processing. In extreme cases, debris can lead to shut the tower down to clean the heat exchangers.

The costs associated with these problems at refineries and chemical processing plants can range from tens of thousands to hundreds of thousands of dollars per day, depending on the type of facility involved and the processes being cooled.

For decades, plants have used stationary water screens to filter debris from cooling tower water. However, these types of screens are not without disadvantages – all of which are tied to the need to periodically clean the screens and the cleaning process itself. The disadvantages can easily offset the presumed lower upfront cost for the stationary screens.

A key disadvantage of stationary water screens is their ability to effectively capture and remove harmful debris during the cleaning process. As the screens are lifted out of the water, large pieces of debris that had been held to the screen by the force of the water running through it typically drop off the screen due to gravity. Additionally, as the debris gathers at the bottom of the cold-water basin it will be pulled back toward the recycling pump due to the undertow effect that occurs as a result of the screens being lifted. A two-screen system, along with debris baskets installed on the bottom of the screens, can help reduce the amount of debris that passes by the screens. However, harmful debris often slips through to the recycling pumps and on to the heat exchanger in a heavy-debris environment. 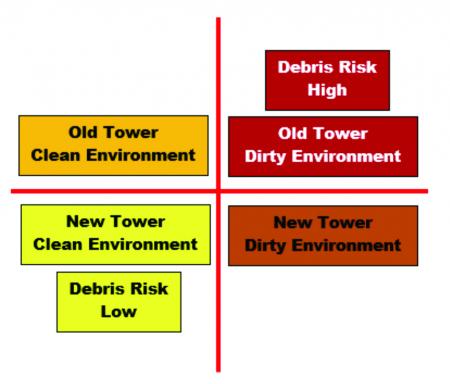 The risk posed by debris in cooling towers varies based on the age of the cooling tower and the cleanliness of environment in which it operates.

Stationary water screens also present a challenging maintenance task. Each time debris builds up on the screens, they must be lifted out of the water and moved to an area to be cleaned. Depending on the number and size of the water screens installed, the cleaning process can be resource-intensive since it requires a crew of people and equipment to lift the screens. It’s also not without risk of personal injury since the screens are cumbersome and heavy and the process typically involves the use of a crane or other lifting devices. Stationary screens can range in size from three feet by three feet on the small end to over 15 feet wide and over 25 feet tall on the large end. The size and number of screens used in any given tower varies by application. 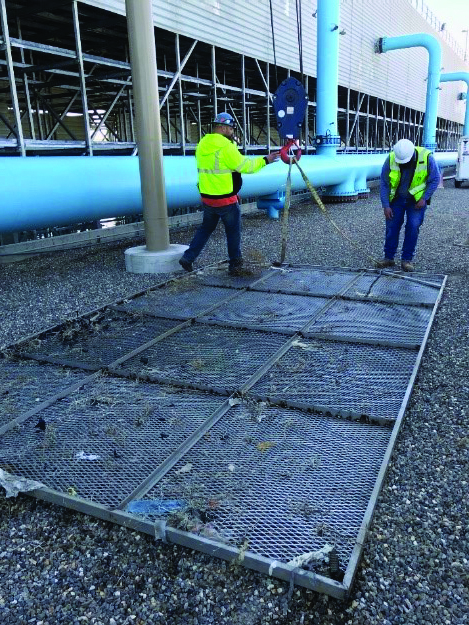 As shown in Figure 1, the basic components of a self-contained traveling water screen include a rotating vertical mesh belt (or screen), spray bar, debris trough, gearbox, and an electric motor or manual device, such as an electric drill on the gearbox or a hand crank, to rotate the screen. The system can be installed using the same guide channels anchored or embedded to the walls of the basin used to install and remove the stationary screens. The rotating belt extends to the bottom of the cold-water basin while the remaining components remain above the water inside the basin. There is little, and often no need, to modify the cold-water basin structure when replacing  stationary screens with a traveling screen as long as it is a “belt-style” system as described in this article. “Basket-style” traveling screens, which are typically found on natural waterways, may not be a practical option due to their large installation profile.

If using an electric motor, there are several options ranging from an on/off switch to a timer to a system that uses a differential sensor that will automatically turn on the system once debris builds up on the screen and produces a pre-determined amount of head-loss.

As the traveling screen’s mesh belt rotates, a series of horizontal flights built into the mesh belt, lift debris from the cold-water basin to the trough at the top of the device. There, a series of nozzles on the spray bar spray water on the belt, washing off debris and depositing it into the trough. The spray water is regularly filtered back into the cold-water basin through a drain. Debris is then periodically scooped out of the trough.

Once installed, a traveling water screen requires one person to operate the device and clean out the debris trough – eliminating the need to tie up a crew and lifting equipment.

Another crucial factor is the impact of cooling on production and the return on investment for a traveling water screen system. As an example, due to a large volume of debris passing by their stationary waster screens, debris obstructed numerous heat exchangers at geothermal plant resulting in a 7% decline in power generation in less than twelve months. In addition, the plant planned for maintenance outages every two years. However, the debris problem forced the facility into an annual outage which costs the plant over $300,000 in lost production and maintenance costs for a vendor to clean the debris from the heat exchangers.

By replacing the stationary screen system with the traveling water screen system, the plant estimated it saved over $800,00 during a five-year period by simply reducing the number of required maintenance outages.

When used as part of an ongoing program to ensure cooling water is properly filtered and free of debris, traveling water screens are worth consideration when the goal is to ensure cooling towers cost-effectively and efficiently deliver process cooling needed at all times.