Cooling large buildings typically requires the use of air- or water-cooled chillers that produce chilled water, which then cools the air. About 39% of buildings over 100,000 square feet use chilled-water systems employing various refrigeration compressor designs.

Selecting the right chiller and compressor requires a specifying engineer to determine the building’s cooling load and the proper chiller capacity¹.  Calculations are also done to determine the return on investment between different systems by comparing the energy cost per ton of refrigeration along with the operational costs.

This article discusses the impact of oil on chiller compressors and examines the performance of variable-speed centrifugal semi-hermetic compressors with oil-free magnetic bearings over a 10-year period in two real-world applications.

Oil is used to form a seal that prevents refrigerant from returning to the suction port as well as lubricate the compressor bearings, gears and shaft seals. While necessary for operation, the oil over time becomes entrained in the refrigerant and circulates throughout the system. Eventually, the oil coats the heat exchanger tubes, which creates a thermal barrier that degrades efficiency — a problem known as “oil fouling.”

A number of independent third-party studies detail the consequences of oil fouling, which include:

This study concluded that screw compressor wear significantly impacts performance by the fifth year of operation, and subsequent performance degradation was found to be as high as 26% on average after 15 years of operation.

Theoretically, an oil-free hermetic compressor design avoids the frictional inefficiency, degradation and maintenance issues associated with conventional oiled compressors. But how does it compare in actual practice after years of operation?

To find out, Danfoss initiated a research project in 2018 to compare the present-day performance of Danfoss Turbocor® compressors in operation for 10 or more years with their performance when originally installed. The study sought to determine if oil-free compressors experienced the same performance degradation found in traditional oiled compressor types — or whether they maintained their original level of performance. The study confirmed compressors with oil- free magnetic-bearings maintained consistent performance over a 10-year period. 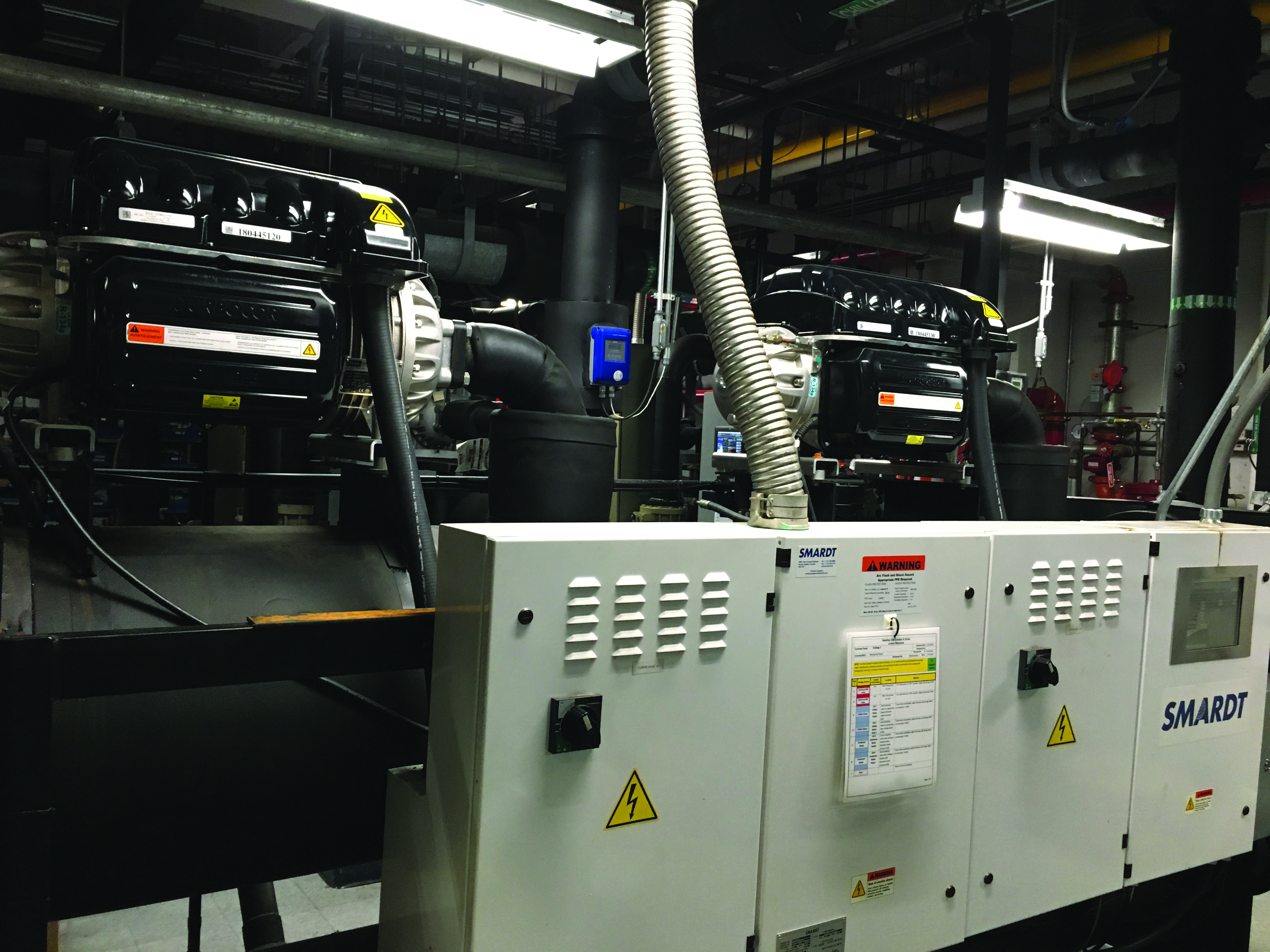 The study analyzed two applications, including oil-free centrifugal compressors used on water-cooled chillers at a data center for The Hershey Company, a global confectionery leader famous for its chocolates, sweets, and snacks. In 1973, it opened Hershey’s Chocolate World in Hershey, Pennsylvania, and then expanded to locations that today range from Times Square to Dubai to Shanghai.

The two compressors submitted for performance testing incurred over 38,967 and 38,928 hours of operation, respectively, resulting from operation 24 hours per day, seven days a week in data-center cooling for more than 10 years.

Compressor No. 1 tested at 48.0 kW power consumption and Compressor No. 2, 49.0 kW power consumption, at pressures, RPMs, and capacities shown in Tables 1 and 2.
Although no official test standard pertains to standalone centrifugal compressors, AHRI 540-2015 was used as a test reference as explained below. These results fall within the AHRI 540-2015 uncertainty limits for the verification of published ratings for an application envelope with 95% for minimum mass flow and minimum refrigerating capacity and with 105% maximum power input.

These results were then compared with the original test parameters for each compressor when they were tested and shipped in 2007 from the Danfoss factory to the chiller manufacturer.

The range of deviation for kW and mass flow as shown in Tables 1 and 2 were all within the acceptable uncertainty limits for performance per AHRI 540-2015. This range approximates the expected performance values for new compressors.

The results show the TT300 oil-free compressors experienced no significant performance degradation over an 11-year period. This evidence indicates the compressors provided consistent, long-lasting performance that is likely to extend over the life of the chiller.

“In a data center, reliability is everything. This chiller with TT300 magnetic-bearing compressors has been, and still is, an extremely reliable chiller,” said Steven C. Miller, Senior Maintenance Specialist for The Hershey Company Data Center.
“Operational and maintenance costs are way down because there have been very few repairs over the ten-plus years this chiller has been in service,” he said. “We originally selected this technology due to low noise levels and a track record of success at other sites. In our case, the chiller with Danfoss Turbocor compressors has met and exceeded my expectations regarding performance.”

The study examined the results of a second application involving the use of the compressors on air-cooled chillers at the Australian Broadcast Company (ABC) Studios, Melbourne, Australia. 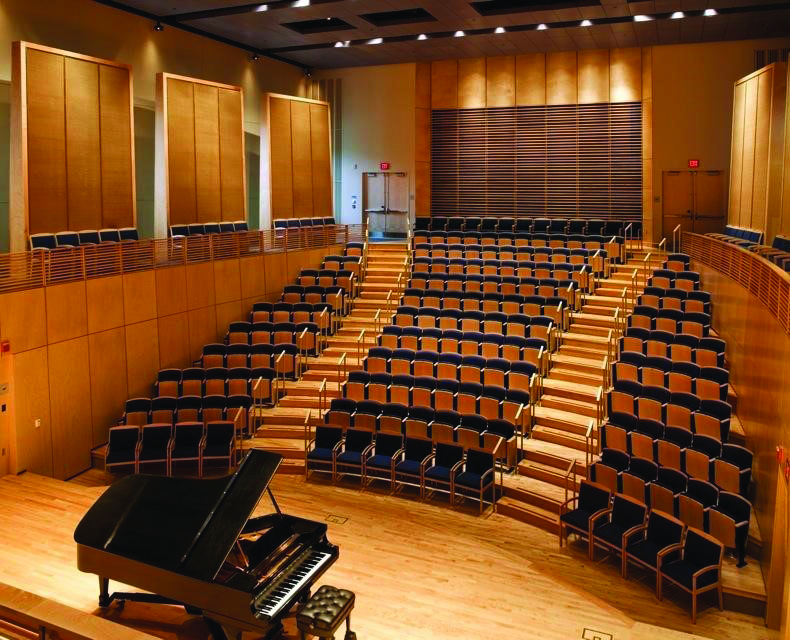 An inside look at the Australian Broadcast Company (ABC) Studios in Melbourne, Australia.

One of the three compressors from the existing chiller was selected for performance testing. The tested compressor incurred 10 years of operation with varying space-cooling needs for the studio situated in Melbourne’s temperate oceanic climate. In September 2018, the compressor was removed from the chiller and replaced with a new TT300 compressor. The existing compressor was sent to Danfoss’ test laboratory at Innovation Park in Tallahassee, Florida.

The TT300 compressor tested at 47.5 kW at the operating conditions shown in Table 3. These results also fall within the AHRI 540-2015 uncertainty limits as previously discussed. These results were then compared with the original parameters when the compressors were shipped in 2008 from the Danfoss factory to the chiller manufacturer.

From its original 2008 power test value of 46.3 kW, the compressor deviated 2.59% higher 10 years later as shown in Table 3. Mass flow was 0.92% lower. The range of deviation for kW and mass were all within the acceptable uncertainty limits for performance per AHRI 540-2015. This range approximates the expected performance values for new compressors.

The results show the TT300 oil-free compressors experienced no significant performance degradation over the 10-year period. The data are additional evidence indicating consistent, long-lasting compressor performance that is likely to extend over the life of the chiller.

“The deciding factors for selecting the chillers were the small footprint due to limited space, no cooling towers, low noise due to the expanding residential towers in the adjacent area and the most efficient technology available, said ABC Studio Facility Manager Greg O’Brien. “The requirements were met along with the flexibility of multiple compressor chillers to handle the fluctuating loads and the low starting current (2 amps per compressor), which allowed the existing standby generator to start the chillers.”

Oil-free magnetic bearing Danfoss Turbocor compressors maintained consistent energy efficiency and capacity for over a decade, translating into zero performance degradation and substantial energy cost savings over the life of the compressor.

Reductions in CO2 emissions are also significant because the performance degradation commonly experienced with oil-lubricated compressors over the same period is avoided. There are additional benefits in that the compressors ran reliably and simplified maintenance, indicating many more years of like-new compressor performance that will extend over the chillers’ lifespans.

About the Author
Eddie Rodriguez is Strategic Marketing Manager, Danfoss Turbocor Compressors. Danfoss engineers advanced technologies that enable us to build a better, smarter and more efficient tomorrow.  In the world’s growing cities, we ensure the supply of fresh food and optimal comfort in our homes and offices, while meeting the need for energy-efficient infrastructure, connected systems and integrated renewable energy. Our solutions are used in areas such as refrigeration, air conditioning, heating, motor control and mobile machinery. Our innovative engineering dates back to 1933 and today Danfoss holds market-leading positions, employing 27,000 and serving customers in more than 100 countries. Danfoss is privately held by the founding family. For more information, please visit www.danfoss.com.

All photos courtesy of Danfoss.