Of all the water on Earth, 97% is seawater. Only 3% is fresh water and only a small fraction of this is available for potable use. 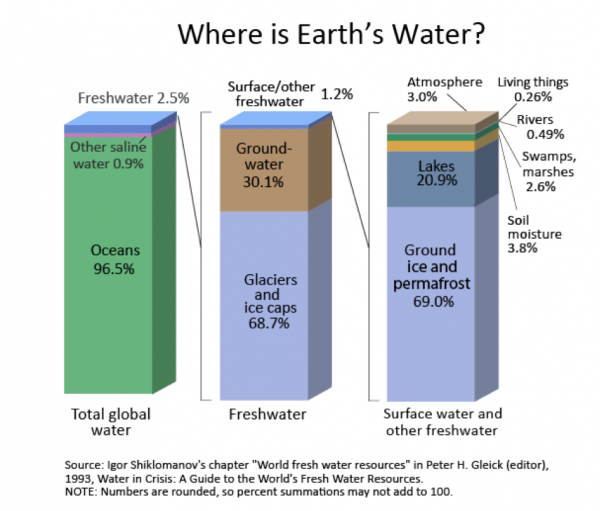 Truly pure water is one of the rarest commodities and a precious resource. Chemical analysis of even the purest drinking water yields trace amounts of a variety of minerals, from calcium to iron and heavy metals. Chemical compounds, although typically found in small amounts, make it through standard water purification processes, as do biological materials.

Such minor impurities in water might not generate serious concerns in the day-to-day water usage in household applications. However, in commercial and industrial applications, this level of impurity poses risks negatively impacting production at best, and endangering lives at worst. For example, manufacturers of electronics, computer components (such as semiconductors, microchips, and circuit boards), chemical compounds (for research and production), medical equipment and pharmaceuticals have a nearly unquenchable need for what is called “ultrapure” water. Failure at any point along the chain of process and manufacturing will negatively impact equipment (via corrosion and scaling) and formulations (via contamination).

Industrial cooling and refrigeration equipment used in manufacturing and environmental control rely heavily on water to either cool, or otherwise regulate product or formulation temperature during processing. While such equipment can appear to function efficiently without input of truly pure water, the unknown cumulative build-up of scale and corrosion would be costly due to high maintenance, related damage, reduced efficiency, and ultimately, premature equipment failure. 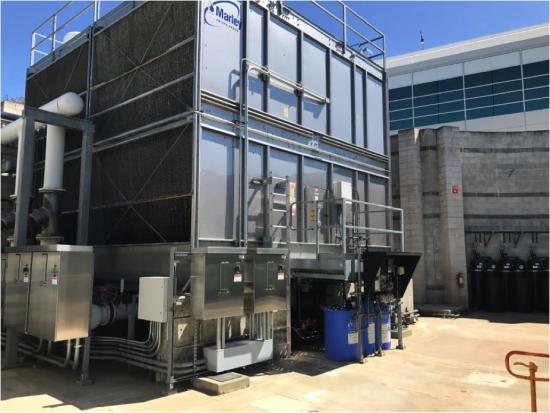 Technology for process water treatment historically presented challenges of both economy and affectivity until the development of Universal Environmental Technology (UET) in the 1990s. The UET system employs a controlled partial electrolysis process within a series of tubular reactors on a basin side loop. This process removes impurities, minimizes scaling, reduces corrosion and eliminates bio-contamination throughout the process equipment.

A computerized controller continuously adjusts the electrolysis process across 42 parameters every 6 milliseconds. Firing a direct-current electric charge from an anode to a cathode through the water medium, a near-constant electrolysis separates H+ and OH- ions from their counterparts. This establishes a chemical equilibrium retaining the minerals required to maintain correct pH balance, rapidly producing mineral scale in a soft and easy-to-clean form within the UET reactors. The resulting process water is now in a state of dynamic equilibrium that will not deposit scale in the process piping, chillers or towers.

The patented UET process has proven a global success, and is now employed in more than 5,000 installations worldwide. These include manufacturers of aircraft, automobiles, heavy equipment, computers, electronics, food, beverage formulators and makers of pharmaceutical products.

Variability of both ambient and internal process temperatures combined with moisture can create an adverse environment. Bacteria, fungus, microalgae and the like will rapidly produce in wet, dark and stagnant conditions. As scale builds, microscopic nooks and crannies are formed where bio-contaminants can flourish.

Believing it would increase sustainability, Roche initially opted for a generic water softener system for its closed-loop evaporative cooling system. As issues with corrosion and bio-contamination continued, Roche sought out Dynamic Water to investigate the UET technology.

Following a thorough due diligence of both the UET process and users of the UET system, Roche’s engineers decided to employ the Dynamic Water Technologies UET system. Within two months, there was a significant decrease in bio-contamination on wet surfaces of the cooling towers. The result allowed the company to avoid using chemicals, eliminate briny softener waste and save water. In accordance with the company’s mission to increase sustainability, water savings have increased substantially, along with the elimination of all chemicals.

The Dynamic Water UET can cycle up to higher concentrations, while more effectively mitigating bio-contamination, corrosion and scale. These results are further accomplished without the need of harsh chemicals or salt. 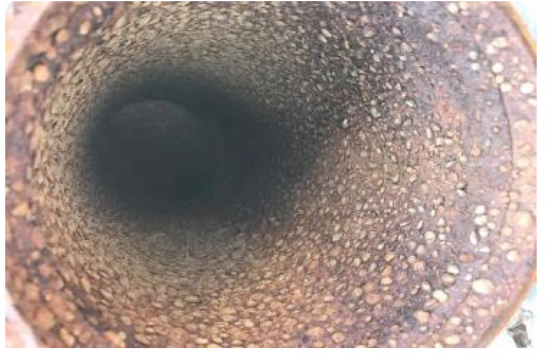 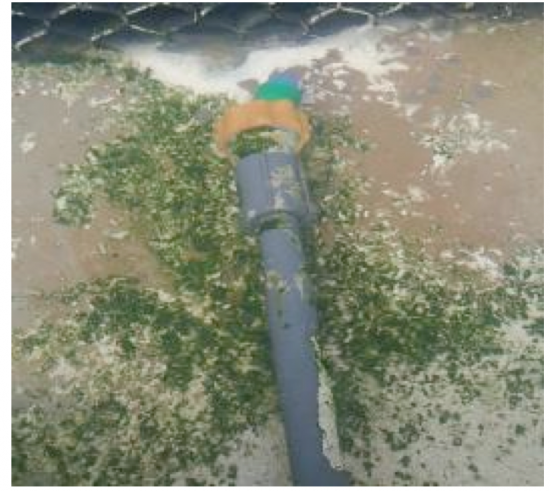 Although a UET system cycles higher than a water softener, it does not generate increased temperatures. DWT hands on approach of working closely with the Roche’s Facilities Operations and Maintenance and the Safety, Health & Environment teams customized a system to suit Roche’s needs.

Conductivity varies due to seasonal use and weather conditions.

Scaling the heat load of 2017’s cycles of concentration to match 2016’s evaporation, the savings are as follows:

Treatment in 2017 was done without the need for chemical treatment or salt, while also eliminating softener brine reject.

Approach temperatures of the chiller system remained unchanged despite cycling much higher than water-softener levels without using the water softener. 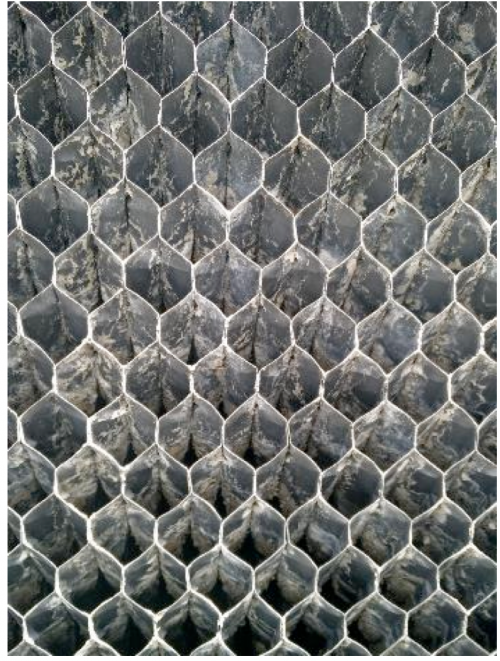 True to Roche’s commitment to sustainability, they have been increasing their water savings year after year. They have been decreasing the amount of water they evaporate, despite later years showing higher temperatures.

Scaling the heat load from 2017’s cycles of concentration to the previous years yield the following results: 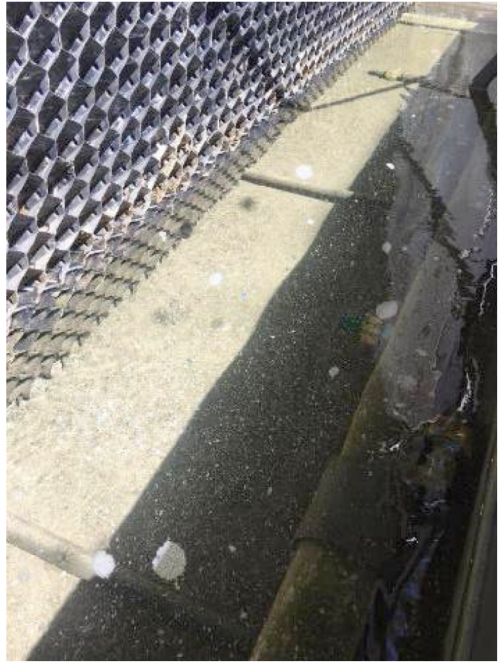 Compared to 2016’s water softener, Dynamic Water’s UET can cycle up much higher concentrations, while more effectively treating bio-contamination and preventing scale without the use of chemicals or salt. There is no brine by-product, and function is not impeded by scale or corrosion.

“The elimination of all our chemical systems, including softened water systems, and reduction in both water and sewer costs, have helped Roche in becoming more sustainable and are what our Safety, Health & Environment group wanted to see,” notes Ted Schnipper, P.E., CEM, the operations & maintenance manager for Roche Molecular Solutions who spearheaded the transition. “Eleven months into the UET’s operation, our water is crystal clear with no evidence of scale, corrosion or bioburden.” 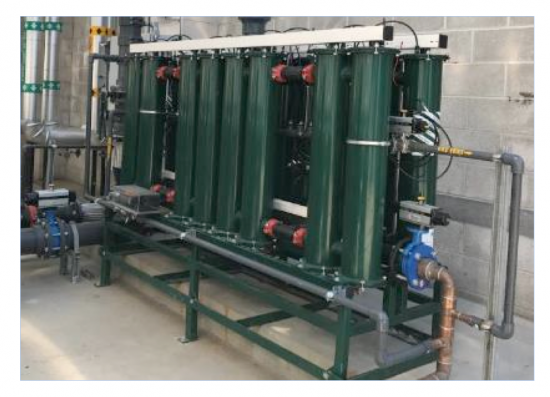 The UET system offers significant reduction in typical corrosion conditions. With this new implementation, it is estimated that Roche’s equipment lifespan may more than double. This is especially valuable if the current treatment program has experienced corrosion due to acid feed.