Cooling towers can use several power transmission technologies, including a gear drive, belt drive, direct drive, and electronically commutated (EC) drive. Each has advantages and disadvantages. The proper selection strikes an appropriate balance of initial cost versus operating costs.

In a cooling tower application, a gear drive reduces the high-speed power from the motor to the lower speed required to power the fan. The induction motor is relatively small because the gearbox multiplies torque.
Gear drives are effective at all cooling tower power levels. Their thick, casted shells housing the gear teeth and oil bath can withstand the high heat and humidity inside the cooling tower. Gearboxes require additional “no load” power to overcome the friction of internal components and oil viscosity. Net efficiency of the gearbox varies per application, but is generally near 96%.

The gear drive requires little maintenance. For example, some gearboxes using synthetic oil do not require an oil change for five years, but cooling tower owners and service contractors should be diligent about inspecting for potential leaks. Another positive feature of the gear drive is that it runs off direct online power. A variable frequency drive (VFD) is not required, but may be included for added motor speed control and energy use benefits. 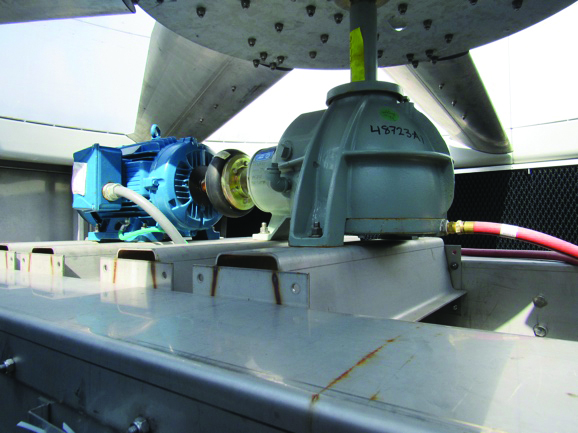 The gear drive reduces the high-speed power from the motor to the lower speed required to power the fan.

Belt drives have been around even longer than gear drives. They are used to transmit motion from one shaft to another with the help of a loop of flexible material, or belt, that runs over two sheaves (also called pulleys) to link the rotating shafts. This technology offers a smooth and effective transmission of power between shafts, even if they are at a considerable distance.

In a cooling tower application, the size of the sheaves determines the speed; different sized belts provide the speed reduction required. The smallest sheave connects to the motor, while the larger fan sheave is connected to a fan shaft. The ratio between those sizes dictates the speed reduction. Belts matching the profile and length requirements of the sheaves transmit power.

Unlike gears, belt drives are exposed to the cooling tower’s hot, moist environment. The initial cost of a belt drive is low, but ongoing maintenance costs grow over time. Sheaves and other components corrode; belts stretch and lose tension. Starting at about 95% efficiency, belt drives can drop to the low 90s or even lower as the belts stretch and wear. Maintenance includes regular belt replacement and fan shaft bearing lubrication several times a year, contributing to its higher lifetime operating cost.

Belt drives are often employed in cooling towers with lower horsepower requirements. Like a gear drive, the belt drive does not require a VFD. 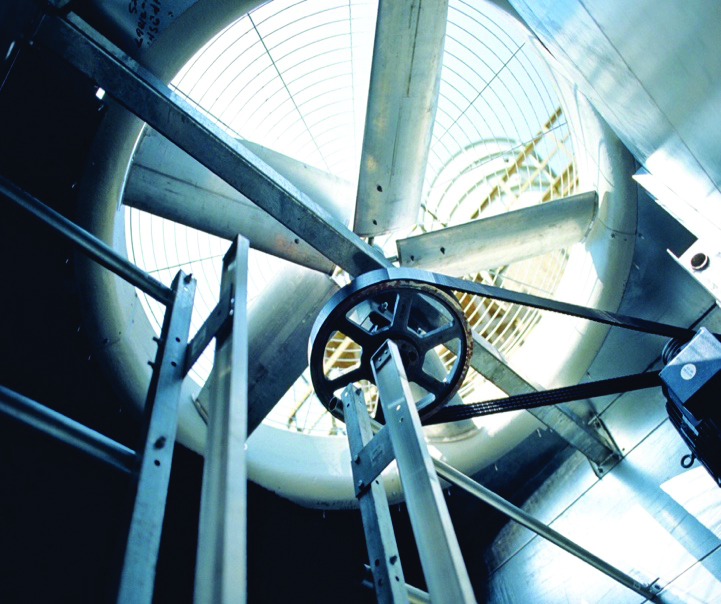 Belt drives transmit motion from one shaft to another with the help of a loop of flexible material.

There are multiple direct drive options in which the motor directly drives the cooling tower fan. The direct drive motor offers reliability with minimal maintenance requirements.

A common direct drive option uses a permanent magnet motor. This is a type of electric motor with rare earth permanent magnets incorporated into the rotor. Use of this technology has grown over the past decade and is now widely used in vehicles, drones, computers, and numerous other applications that need powerful but relatively compact motors.

Ensuring safe operation is a potential concern. With other power transmission options, when the motor is disconnected there is no power to it, making it safe to service. The permanent magnet motor can generate electricity even when power is shut off, potentially creating a dangerous situation. If, for example, wind turns the fan and fan shaft, electricity could travel to where a technician is working on the equipment. Another safety concern is the magnetic field produced, which could impact anyone wearing a pacemaker working near the motor.

A direct drive typically has the lowest maintenance cost over its lifetime because there is no need to replace the oil, no oil seals that can wear, and no need for routine alignment. Annual lubrication is recommended. Initial costs can be two to three times more than a gearbox. Due to the high first cost, payback can extend to 10 or more years. 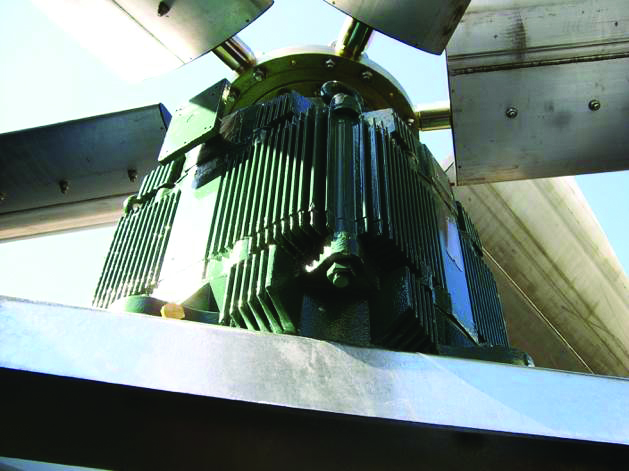 The high-efficiency electronically commutated (EC) motor is a newer technology that combines a small DC motor and an inverter/speed controller into one package. The rotor portion of the motor typically uses rare earth permanent magnets and the integral speed control eliminates the need for an external VFD. For cooling tower applications, the fan, fan shroud, and fan guard are often incorporated to provide a complete mechanical drive package. This provides a simple and compact arrangement that is easy to install in the factory and to replace in the field as needed.

Cooling towers that use EC motors are usually of smaller capacity and footprint with a maximum application size of 10 horsepower (hp) or one-meter fan diameters. Compared to belt drives and other low-horsepower motors (less than 5 hp), EC motors are consistently more efficient. In small-hp applications, the EC motor presents no power transmission loss while other low-hp motors and belt drives can experience power transmission losses from 5 to 20 percent.

Because EC motors use sealed bearings, there is virtually no maintenance. The use of this technology for cooling towers is new and currently lends itself only to low-hp, small fan diameters. 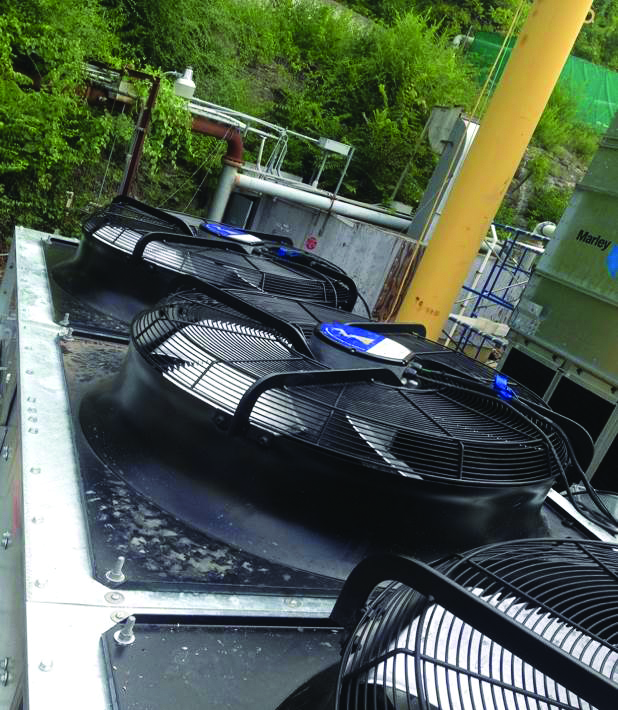 The electronically commutated motor combines the motor, controller and fan together in one package, while using direct drive airfoil impellers.

When choosing among power transmission technologies, cooling tower specifiers, contractors and owners must evaluate costs across the entire cooling tower lifecycle. Factors such as energy efficiency, ease of maintenance, reliability and service life must be balanced against initial investment, installation costs, operational complexity and environmental impact. 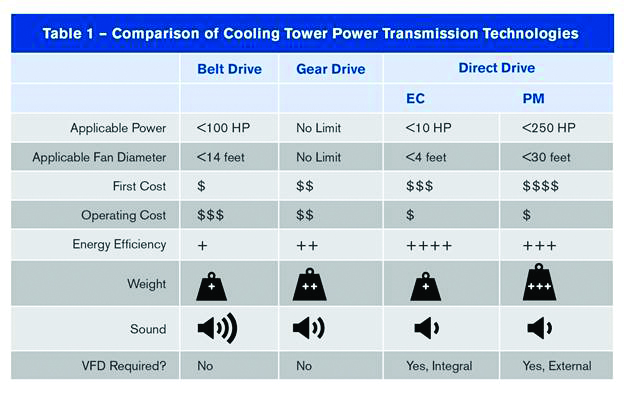 Shown is a comparison of available power transmission technologies.