The craft brewing industry has exploded over the past several years. According to the Brewers Association, in 2012 there were 2,420 regional craft breweries, microbreweries and brewpubs in the U.S. By 2017 that number had nearly tripled to 6,266. The abundance of craft brewers has led to increased competition for market share among consumers, distributors and bars – leaving little to no room for error in the brewing process.

The Science of Brewing

Whether it’s a small, local microbrewery or a large national brewery, temperature control plays an important role in the manufacturing process. While traditional chillers can provide adequate cooling for breweries, keeping them at a consistent temperature can be costly.

A Closer Look at Free-Cooling Technology

Free-cooling is the process of using low-temperature ambient air to chill the liquid in process or comfort cooling systems.

Free-cooling for chillers has been around for decades, with systems limited to providing cooling (and energy savings) during colder conditions. Additionally, chillers were historically limited to relatively low chilled liquid temperatures (55 °F and below).

Free-cooling can significantly reduce operating costs for facilities such as breweries that have year-round cooling requirements. However, not all free-cooling systems deliver the same savings. It is important to understand how recent advancements in free-cooling technology can deliver greater efficiency in savings all year long.

Proven solutions for reducing operating costs of facilities with year-round cooling requirements include field-erected systems consisting of a chiller plus a separate dry cooler, waterside economizers packaged on chillers and evaporative coolers used in combination with chillers. Free-cooling chiller technology integrates a waterside economizer with the condenser heat exchangers, allowing easy service access to all mechanical components and optimizing the footprint, when compared to systems with separate economizers. Some chillers feature a single temperature setpoint that permits easy adjustment as brewery capacity expands.

Chiller design has evolved to respond to expanded operations with a wider range of chilled liquid temperatures. These changes require flexible controls that keep compressor operation within acceptable conditions for enhanced reliability. Integrating variable-speed fan controls and variable-speed compressors into the chiller has helped this process, further improving energy efficiency.

The most recent advancement in free-cooling chiller technology combines new control strategies with mechanical advances to further enhance chiller performance at design and off-design conditions. The chiller’s mechanical improvements include variable-compression ratio compressor control, which prevents wasting energy on over-compression at reduced ambient temperatures and variable-speed drives (VSD) for both the compressors and fans. 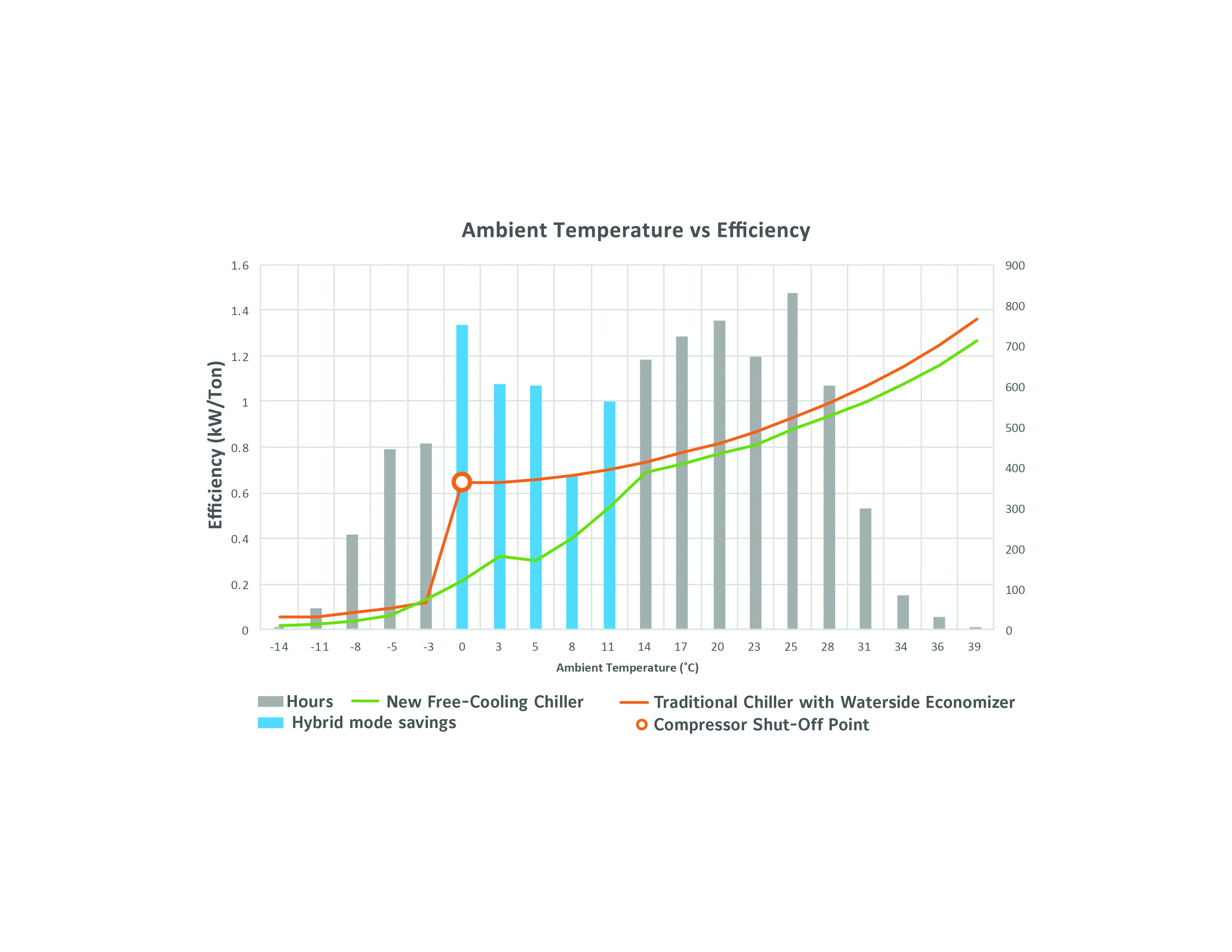 This chart shows how a free-cooling chiller’s automatic controls help it outperform a traditional fixed-speed chiller and waterside economizer with fixed shutoff temperature for compressors.

For example, the chiller operates in a mechanical mode when it is too warm to use ambient air for free cooling. In this mode, the chiller performs as a standard chiller. An automatic liquid control valve bypasses the free-cooling coils to reduce chilled fluid pump head pressure and save energy, allowing breweries to save on operating costs while ensuring product is kept cold in warmer climates. 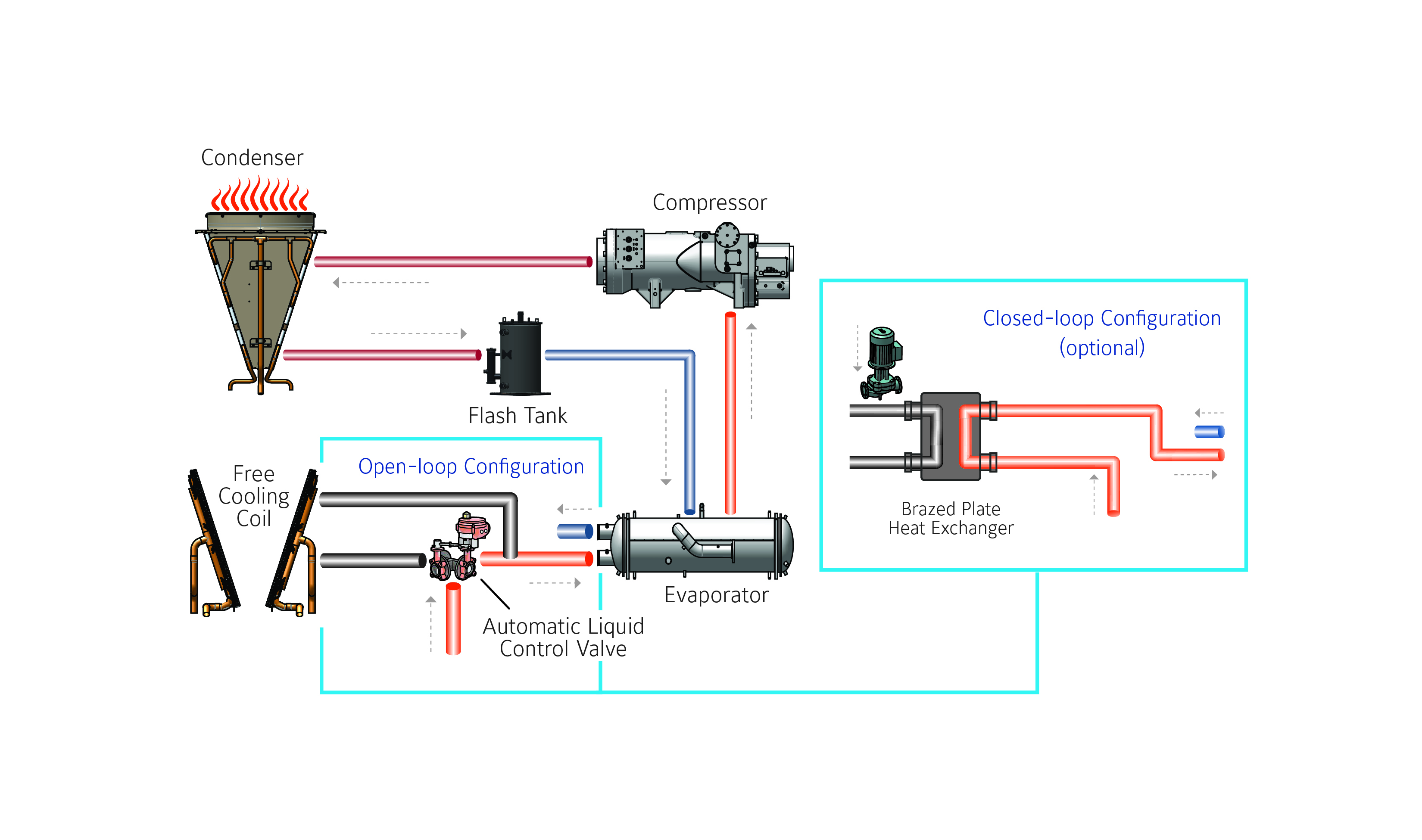 In mechanical mode, the chiller operates as a standard chiller during warm temperatures by utilizing an automatic liquid control valve to bypass the free-cooling coils to reduce chilled fluid pump head pressure and save energy. 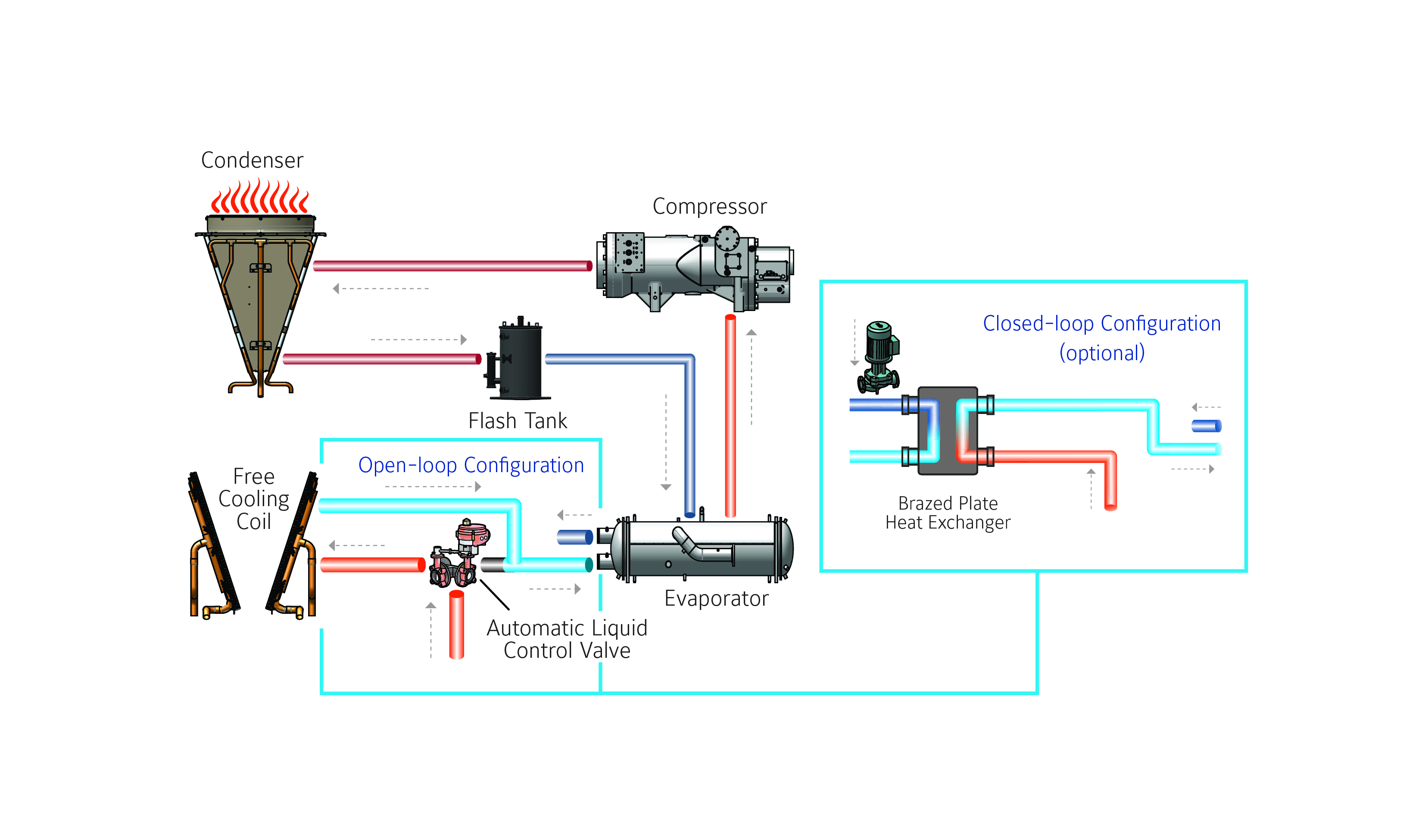 In hybrid mode, chillers optimize energy use through simultaneous operation of the compressor(s) and free-cooling coils.

Across a wide range of ambient conditions, the power used in VSD-optimized hybrid mode is less than the power consumed by turning off compressors and running fans at full speed to meet cooling demand with free cooling alone. In those cases, hybrid mode outperforms simple waterside economizer free-cooling systems. Internal chiller control logic automatically selects the optimal operating mode to assure maximum energy efficiency. When either cooling load or ambient temperature are below design condition, the variable-speed screw compressors and condenser fans modulate to optimize energy use.

Free-cooling mode operates at lower ambient temperatures, when the required cooling load can be most efficiently delivered by free-cooling coils. Compressors shut off and VSD fans modulate to meet the cooling setpoint. The controls determine the optimum conditions, moving between different operating modes to minimize energy use while assuring reliable operation. Additionally, starting in free-cooling mode at very cold ambient conditions only requires fan motors to start, reducing the possibility of nuisance trips that can occur at low-ambient and/or high-wind conditions. This technology provides significant chiller optimization that delivers significant energy savings to breweries. 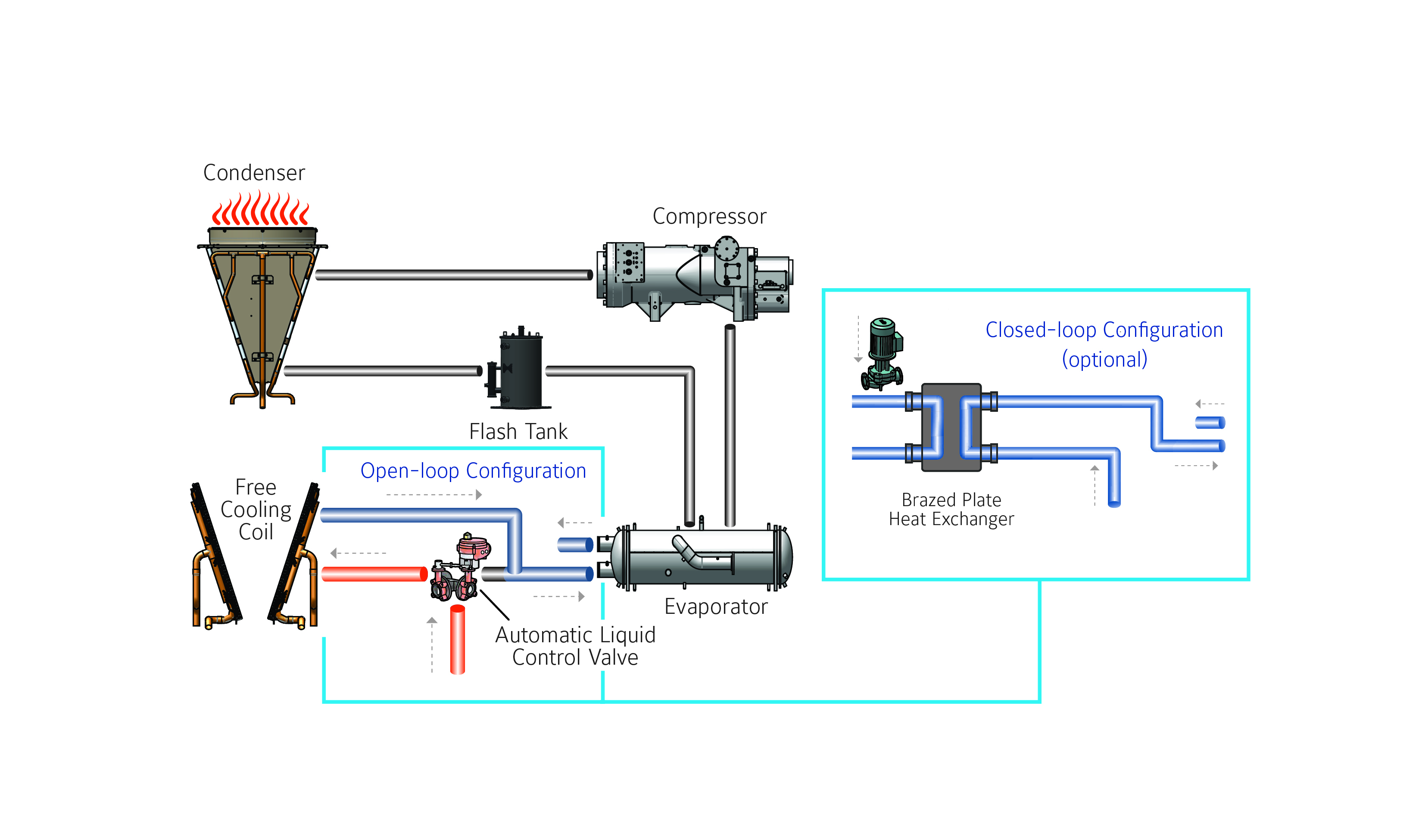 Free-cooling mode operates at lower ambient temperatures since free-cooling coils most efficiently deliver the required cooling load. A closed-loop is recommended when an installation requires water in the building loop.

These advancements in technology enable a chiller to deliver the lowest annual operating cost to breweries. Using the highest leaving water temperature provides greater savings and more cooling capacity in the same footprint as traditional systems. The combination of warmer chilled liquid temperatures and intelligent fan and compressor control during peak load provides more operating hours with free or partial free cooling to deliver the lowest operating cost – making it an ideal solution for breweries in warmer climates.

Confirming the benefit of the system is simple. Tools, such as an Annual Energy Calculator (AEC), provide an easy to read, comprehensive report that can be shared with owners and operators to accurately estimate total energy cost. Free-cooling chiller technology helps breweries significantly improve operations to save energy and manufacturing costs year-round, regardless of the ambient temperature, while maintaining the coolness and freshness of their product.

Johnson Controls is a global diversified technology and multi-industrial leader serving a wide range of customers in more than 150 countries. Our 120,000 employees create intelligent buildings, efficient energy solutions, integrated infrastructure and next generation transportation systems that work seamlessly together to deliver on the promise of smart cities and communities. Our commitment to sustainability dates back to our roots in 1885, with the invention of the first electric room thermostat. We are committed to helping our customers win and creating greater value for all of our stakeholders through strategic focus on our buildings and energy growth platforms. For more information, visit www.johnsoncontrols.com.