By Tus Sasser, The Tustin Group

Patrick Towbin, VP of Asset Management for PES, was brought on board to improve the performance of the MTCC plant. It didn’t take long for him to see that the 16,200 Ton chiller equipment accounted for a large portion of the MTCC’s production costs, and that there were opportunities to improve the efficiency of the operation of this equipment. He hired John Rauch to head the plant’s operational management team. The new mandate, under the direction of Towbin and Rauch, was to seek cost effective ways to improve the operations of the MTCC, especially the larger contributors to production costs. 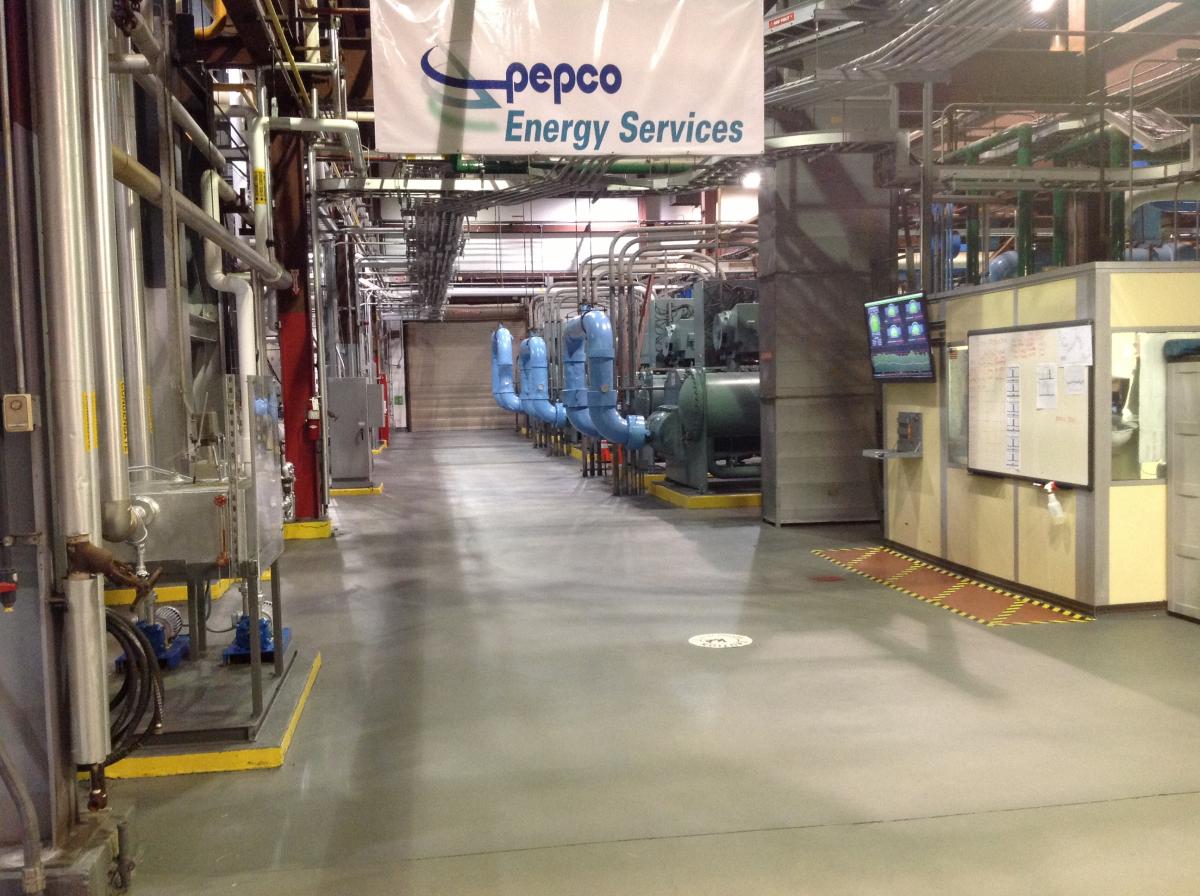 Within a short time of his arrival, Rauch, as the new PES Plant Operations Manager, saw that MTCC was relying on the same equipment and processes that were put in place when the plant was built over 15 years ago. “We started our review by asking ourselves how can we produce chilled water more efficiently so that we can improve our bottom line. With this as our guide, we identified many opportunities for improving efficiency at the plant. Not only in the chilled water production process, but also in measuring and monitoring the output of the production process.”

Rauch’s investigation showed that the plant was being operated and maintained with a series of independent components and controls, many of which had been modified over the years. From experience, Rauch knew that even the most efficient components fail to meet their promised efficiency over time. He believed it was essential to look beyond component-based efficiency and employ a holistic approach where components work optimally as part of a networked interrelated system.

Rauch lost no time in contacting Brad Pappal, General Manager of Tustin Energy Solutions (TES), a commercial energy management company headquartered in Norristown, Pennsylvania, to help evaluate the situation and submit a proposal for improvements. Rauch had worked with Pappal’s team in the past on projects that successfully and significantly reduced energy consumption. What neither party knew at the time was the amount of effort it would take to compile the data necessary to develop a baseline and prepare a proposal for improvements. Once the initial survey and site assessment was complete, it was clear that the largest opportunity for cost effective energy reduction was in the chilled water production process. However, the opportunity was not simply replacing or adding equipment. It was modifying the controls strategies with which chilled water was produced. TES then reached out to Kiltech, Inc., their partner for central plant optimization, to review the opportunity.

“Without good data and a good control system, how do you know if, or what, you need to optimize?” explained Rauch. “For over 10 months in 2012 we worked with TES and Kiltech, Inc. on the data collection/validation phase in order to understand what we had so that we could very accurately portray what we could gain by implementing a central plant optimization system. We reviewed all prior electric bills and upgraded many flow and temperature transmitters to make sure we got accurate baseline data.” Rauch understood that improvements in the chilled water production process would be evaluated in competition with other capital expenditure options under consideration by management. Because capital budgets are limited, it was vital that he accurately quantify the benefits to be achieved with the expenditure to gain approval to proceed.

Once the development and costing process was complete, Towbin spent countless hours reviewing the financial implications of the project. However, before he would submit the proposal to the corporate decision makers in Virginia, he asked to see a working site and to speak to the end users. Kiltech, Inc. scheduled several site visits for Towbin to review, assess, and interview which provided the confidence he needed to move the proposal forward.

The proposal showed that PES could reduce its chilled water production costs by well over 20% by implementing the proposed chiller optimization changes and other energy efficiency measures. “Over twenty percent is a big number and management was initially skeptical,” said Rauch. “It took almost four months of additional validation to address their questions and to demonstrate that the calculations were accurate.” For Towbin, who had been involved with similar projects before, the fast payback was obvious. Towbin relied upon his expertise in analysis, engineering, and asset management to convince his management of the excellent economics associated with the project. The project qualified for a half-million dollar rebate from the New Jersey Office of Clean Energy’s NJ SmartStart Buildings® Program, and also resulted in nearly 25% improvement in operating efficiencies. In the end, and after thorough due diligence on their part, Towbin and Rauch prevailed and the project was approved. 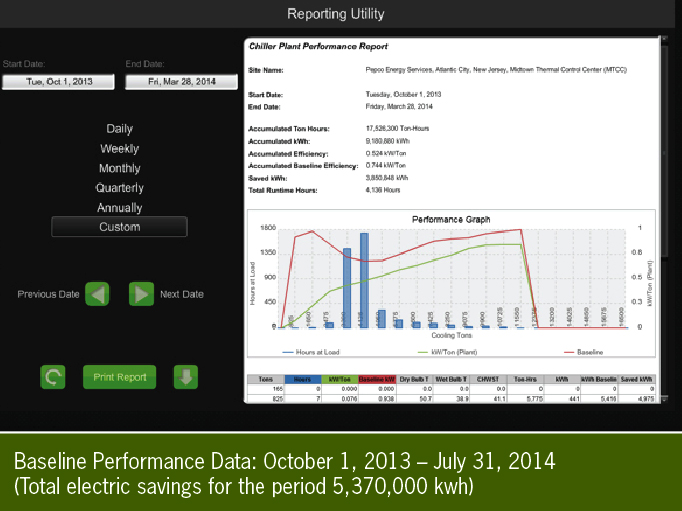 The proposal called for TES to make numerous energy efficiency upgrades including VFDs, and to utilize a non-proprietary automated plant optimization application from Kiltech, Inc. called CPECS (Central Plant Energy Control System). “When CPECS is deployed (either in new construction or retrofit) it routinely achieves annual averages of 0.55 kW/ton and lower for the entire chiller plant, (depending on the application), thus translating to significant annual energy and cost savings,” explained Pappal. TES application engineers and programmers worked closely with Kiltech, Inc. to customize the system’s software that automatically sequences the operation of the entire chilled water plant. The CPECS networked optimization software was designed to take advantage of the Plant Control System (PCS) to maximize central plant efficiency. “We were able to interact with the plant’s existing Allen Bradley Rockwell Plant Control System to fully optimize the mechanical systems in the plant,” added Pappal.

The CPECS’ networked onsite server that is deployed on the backbone of the current PCS, receives data, processes and models the data and provides historical, real-time, and predicted data. The data outputs from the CPECS provide the operational strategies that are automatically implemented by the plant control system. Based upon the energy efficiency measures developed during the initial verification process, TES upgraded various motor starters and system critical instruments required for optimization.

All About the Algorithms

“The CPECS platform uses a non-proprietary, open protocol and fully modeled methodology. The approach is model and simulation driven and is customized to PES’ plant and operations. At the heart of the software is an algorithm that is computing all possible chiller, pump and cooling tower sequencing permutations, modified flows, set points and load limits. These calculations find the combination of equipment and speeds that result in the lowest kW input and/or the lowest instantaneous cost of production,” explained Joshua Kahan, General Manager for Kiltech, Inc. “All of this is recorded, reported and implemented in real time.”

“It’s all about the algorithms,” explained Rauch. “The system has what’s called a Brute Force Optimizer algorithm that constantly calculates the most efficient operation scenario. Algorithms run every 15 minutes, 24/7. They make real- time automatic adjustments to the system based on real-time building loads. The optimization software then simulates that data and directs the PCS for adjustments needed to maximize the system performance. The software has complete knowledge of compressor, tower and pump performance characteristics, which it uses in real time to modulate control levels to all VFDs, pumps and machines.”

“If you have the right algorithm and you work with the details that go through it, then it’s pretty straightforward,” explained Towbin. “The program’s successful implementation is largely due to how much patience Rauch and the operators had to make sure the algorithm was programmed correctly.”

The program’s continuous feedback loops provide detailed, real-time and historical performance data so operators can quickly detect, diagnose and resolve system faults. “They can see the data via easy-to-read graphs and charts that allow for quick diagnosis of faults,” said Rauch. “If a chiller goes down for maintenance, the software recalculates, and readjusts, and reassigns the process workload accordingly.”

Plant operators were initially skeptical about a “Hands Off” system taking over completely. “The idea of a plant running relatively ‘hands free’ in terms of operating efficiency led to a concern about job security,” explained Rauch. “However, the way things have worked out, operators are now more available to do maintenance, shutdowns, and system analysis, and can do so without missing critical control changes.

The system’s automated demand response, used for balancing supply and demand, allows operators to program the optimization system so it stays under a predetermined plant electrical load. “The optimized control program will now do the adjustments for them,” said Rauch. “This is a long way from the days when operators had to stare at a screen and stress over all the things that had to be tweaked, or turned on or off, to meet a demand response number at peak hours. Many of the MTCC’s customers are event driven and when there are large events, usage can increase dramatically. The CPECS can now help PES better manage these peak usage episodes.”

“In addition to achieving operational efficiencies and savings, this central plant optimization project clearly demonstrated how automated optimization of a complex plant like MTCC can help the owners meet their operational goals by helping them achieve production reliability, as well as enhanced visibility into operations and equipment that enables them to foresee challenges that may impact performance or operations,” said Kiltech’s Joshua Kahan.

One of the things about the CPECS that impressed Towbin was actually finding new opportunities for additional efficiencies. “You start to see things that you never knew were acting as a drag on our production efficiency,” he said. “The side benefit is that it helps you optimize your plant and your operations because the system brings to light situations that you had never questioned before. In the end, it was a very deductive way to implement improvements in our plant.”

The chiller plant optimization was completed in 2013. Since deployment, it has become commonplace to see daily savings of 30% relative to baseline. Going forward, savings are expected to be 20-25% annually. “The Midtown plant operates at near maximum cooling capacity during the summer months and there are limits to the optimization based on weather conditions and customer occupancy,” explained Pappal. “PES benefits most during shoulder and winter months. The demand is much lower and the maximum benefits of optimization are realized. Regardless, the first priority of cooling is always met.“ In addition, Towbin added that “now we have people from all over the company coming here to see the efficiencies we have gained.”

During the chiller plant optimization, TES repurposed two additional aging proprietary control systems at MTCC and remote mechanical plant for the Atlantic City Convention Center. Along with upgrades and equipment, TES/ Kiltech combined services will save PES over $500,000 annually in energy, repair, and unnecessary services.

“Plant optimization where components work optimally as part of a networked, interrelated system has allowed us to reach a new level of plant efficiency,” said Rauch. “With the right team, you can make the technology work seamlessly. And that is what we have here, optimization 24/7, helping us save upwards of 25% annually.”