For U.S. Flue-Cured Tobacco Growers, Inc. (USFCTG) sustainability is a guiding practice for tobacco production from seed to delivery. So when traditional chemical water treatment had proven problematic in air washers at its plant in Timberlake, North Carolina, the company thought outside the box for solutions to address a variety of issues while also supporting its sustainability goals.

The thinking led to a trial of ProMoss™, a unique-plant based material that has shown to be effective for water treatment in industrial process cooling systems. Conducted by Southeastern Laboratories, Inc. (SEL), the trial in an air washer demonstrated the natural product would serve as a better method for treating cooling water at the plant. As a result, USFCTG opted to use ProMoss instead of chemicals in all air washers at the plant, allowing it to save 41,500 gallons of water per year. Additionally, the alternative water treatment program improves air washer and plant uptime while reducing energy consumption. 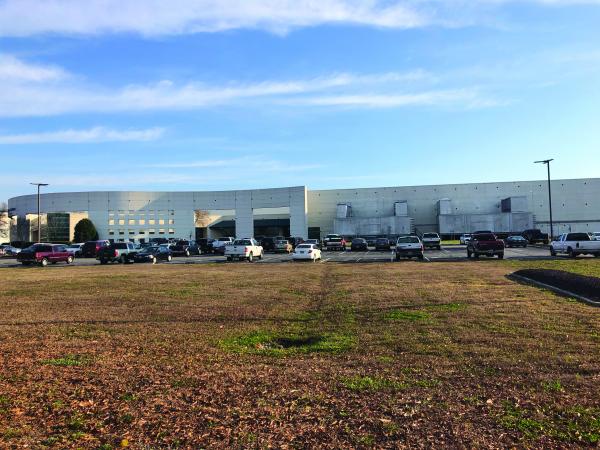 USFCTG’s Timberlake operation processes tobacco and manufactures as much as eight billion cigarettes per year. The grower-owned cooperative and manufacturing subsidiary of U.S. Tobacco Cooperative Inc. (https://www.usleaf.com) is a Sustainable Tobacco Production program member that takes pride in balancing its range of tobacco production with soil and water conservation and appropriate use of agrochemicals.

The plant in Timberlake spans 340,000 square feet, with an adjoining 150,000-square-foot warehouse. During the high season for production, which typically runs from late-August to late-January, 300 employees are involved in 24-hour production that runs three eight-hour shifts, and in lower periods running in two ten-hour shifts, four days a week employing 80-100 employees. The primary blending and cigarette operation runs year-round.

Flue-cured tobacco derives its name from a curing process introduced centuries ago in which tobacco sticks are hung from tier-poles in curing barns. The barns had flues that ran from externally fed fireboxes to heat-cure the tobacco without exposing it to smoke. Today, the curing process is carried out through fuel-generated heat to dry the product. While the plant primarily produces flue-cured tobacco, it also processes other forms of tobacco in its primary blending and cigarette department.

Key to production at the Timberlake operation are three air washer systems used to keep temperatures and humidity consistent throughout at the plant while removing particulates from the air.

“Air washers are used in different types of manufacturing operations, but they are particularly useful for our plant where scrubbing the air of particulates and managing humidity and temperature is extremely important to maintaining product quality,” said Scotty Young, Facilities/Maintenance Manager, USFCTG.

An air washer system operates by passing air returning from plant production areas through a dry filter media, and then through a wall of water created by a series of spray nozzles. The process captures particulate and gaseous impurities generated within the manufacturing process. Fine water droplets and excess atmospheric humidity are also captured and removed from the airflow within a series of eliminator blades as the air exits the washer water spray area. Conditioned air is then returned to production areas via a series of fans and ducts. Controls are used to adjust the level of spray to accurately control temperatures and maintain 60% Relative Humidity (RH) where used.

The air washers each incorporate individual water reservoirs and secondary heat exchangers and operate independently to serve different areas within the plant. The AC Corporation Model Z-92000 air washers include Unit No. 1, which is rated to supply 80,000 cubic feet per minute (cfm) of conditioned air to the primary blending storage. Units No. 2 and No. 4 are each rated to provide 130,000 cfm of conditioned air to the cigarette production department. 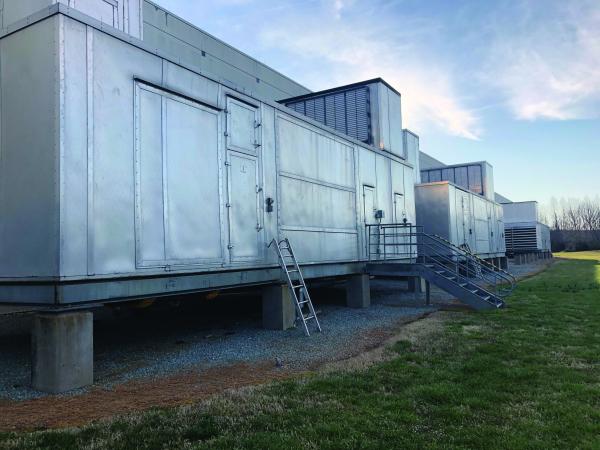 Three water-cooled chillers are used in conjunction with the air washers for comfort cooling, depending upon seasonal demands. They include a 1,250-ton Trane® chiller, along with a 370-ton McQuay unit and a 275-ton York® chiller. Three Marley® evaporative cooling towers supply the plant with process cooling water. Two towers are rated at 498-tons each, while the third is a 949-ton unit.

Though chemical treatment is a standard practice for treating air washers in the tobacco industry, it proved problematic for the plant. Challenges with chemical water treatment systems is not uncommon for air washer systems in tobacco and textile plants given the high level of organic particulates.

Until recently, USFCTG had used a mixture of oxidizing and non-oxidizing biocides, dispersants, and corrosion inhibitors in large amounts to effectively treat its air washers. The chemicals are used to keep bacteria levels in control, ensure clean surfaces, and provide corrosion protection.

Process cooling water treatment is particularly challenging with tobacco production, however, due to elevated nitrogen levels and accelerated bacterial activity. Build-up of bio-slime masses on process cooling surfaces adversely affects the heat-transfer capabilities of the air washers – in addition to clogging spray nozzles.

While the use of chemicals proved somewhat effective at maintaining acceptable heat transfer within the air washers, it created a high level of air washer downtime and adversely impacted production. The problem stemmed from the need to use high biocide dosages to tame bacteria levels. Additionally, the plant needed to use a variety of organic dispersants to effectively break up slime masses. The use of high doses of chemicals, however, can create odor issues and lead to unworkable conditions for employees. The plant, in turn, needed to shut down the air washers with regularity for cleaning and maintenance.

The need to address odor issues often drove the need for the plant to halt production until the problem was resolved. Frequent cleaning of the air washers also required more consumption of water than normally needed, which also came with higher costs for  electrical power and sewer water treatment. Additionally, the plant could not resume production until the air washers were reset and temperatures and humidity levels reached tier target setpoints.

To address the issues with the air washers, the plant explored a number of water treatment options with SEL (https://www.selaboratories.com/), based in Goldsboro, North Carolina. SEL provides water treatment services, including all-natural water treatments and products, to a wide range of industrial, commercial, governmental, and institutional users.

SEL recommended a trial of ProMoss at the plant. ProMoss, manufactured by Creative Water Solutions (https://cwsnaturally.com/), Plymouth, Minnesota, is a plant-based alternative to chemical water treatment. It leverages unique biological properties of sphagnum moss, which is a plant that grows naturally in bogs in New Zealand and along the U.S.-Canada border. The moss has shown to be an effective method for inhibiting and removing organic contamination, as well as scaling and corrosion, in a wide range of process cooling applications.

SEL’s Vice President of Field Operations Steve Chewning said the moss is well-suited to applications involving stressed air washer systems, such as the units at the USFCTG Timberlake plant.

“It’s a natural solution that takes advantage of nature’s chemistry, which makes it a  viable green solution in systems like air washers that experience a high level of organic contamination,” Chewning said.

SEL began a 90-day trial of the moss product in July 2019 in one of two air washers used to serve the plant’s cigarette production department. It included a monthly dosage of four, 150-gram bags of ProMoss, followed by testing every two weeks to assess bacterial counts. The trial also measured water turbidity levels.

With the use of moss, the trial showed a bacteria counts were 100 to 1,000 times lower in the air washer process cooling water when compared with chemical treatment. Lower counts as well as visual observations indicated that the moss was actively working to reduce organic contamination, which in turn, reduces biofouling of pipes and underwater surfaces. 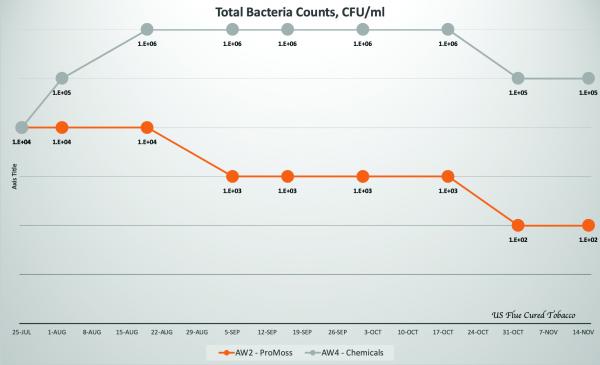 Total bacterial counts were measured in the process cooling water of the air washers at the tobacco plant during the trial to compare the effectiveness of ProMoss (orange line) and chemical treatment (gray line) as measured in Colony-forming Units per Milliliter (CFU/ml). As shown, bacteria counts were consistently lower in the moss-treated air washer. (Chart courtesy of Southeastern Laboratories, Inc.). Click here to enlarge.

The trial also showed the moss removed a higher level of suspended particulates when compared with the chemical treatment program, which resulted in much lower turbidity levels. Turbidity measurement is significant because water with higher turbidity increases biofouling of heat-exchange surfaces and promotes bacteria growth since suspended particulates feed bacteria. Turbidity levels in the trial washer were reduced by about 90% compared with the chemically treated washer. 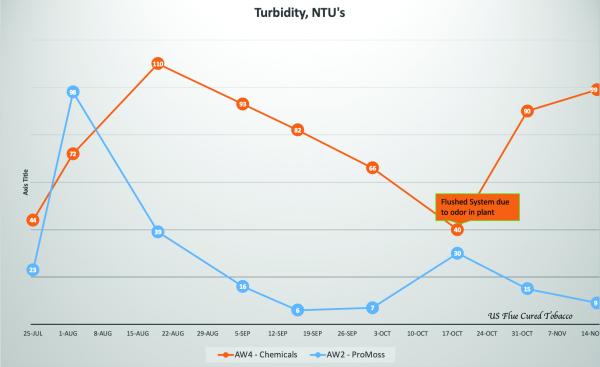 Turbidity levels were measured in the process cooling water of the air washers at the tobacco plant during the trial to compare the effectiveness of ProMoss (blue line) and chemical treatment (orange line) in removing suspended particulates. Measured as Nephelometric Turbidity Units (NTU’s), the chart indicates turbidity decreased from levels near 100 NTU’s to less than 10 NTU’s in the moss-treated washer during the course of the trial, about ten times lower than the chemically treated air washer. (Chart courtesy of Southeastern Laboratories, Inc.). Click here to enlarge.

The impact of ProMoss on the air washer was evident within one week of the first application, said Young.

“You could see noticeable improvement in water clarity immediately and within weeks you could actually see the bottom of the air washer sump,” he said.

Based on the successful trial, the plant began using the moss on all three air washers in December of 2019. Doing so has allowed the plant to:

In addition to using moss for its air washers, USFCTG recently decided to use it to treat water in its cooling towers – once again – replacing the use of chemicals.

“When I first learned about the use of moss for water treatment, I thought it sounded too good to be true,” Young said. “However, it’s proven to be effective in its ability to keep our air washers up and running, while also supporting our sustainability goals. When you consider that it eliminates the need for chemicals for water treatment, conserves water and energy – and reduces utility costs – it’s all we could have hoped for.”

Young added that employee safety and the work environment were also key factors in making the switch over to ProMoss. USFCTG is proud of the result of cleaner, odorless air and the chemical free environment – fostering a safer and more enjoyable environment.