An adequate flow of cooling water is one of the most important variables of the resistance welding process, and the typical machine requires 2 to 3 GPM of water per cooling circuit.

Since there are often several parallel circuits per machine, the total water flow needed can be substantial. As an example, the water cooling needs of special-design automated “multi-gun” resistance welders with multiple transformers and tips can easily total 10 to 20 GPM (Figures 1 and 2). 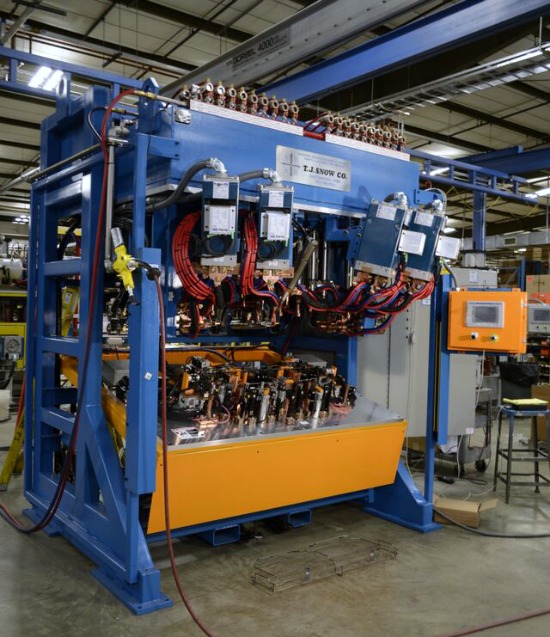 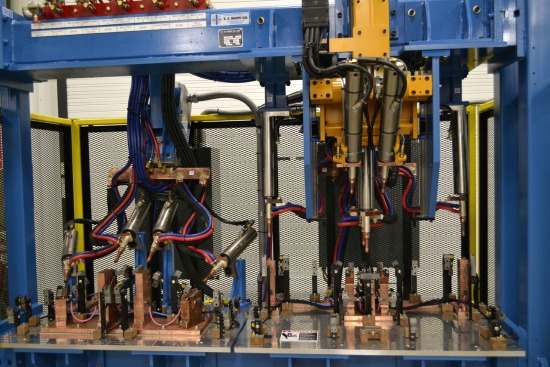 The Days of Plentiful, Inexpensive Water Are Gone

In the past, plants often connected resistance welders to their incoming city water supply and never gave it another thought. However, since the days of plentiful and cheap city water are gone, and sewer charges are often substantial, self-contained water recirculators and chillers have become a popular option.

When a chiller is substituted for city water being wasted, the payback can be as short as a year.

Heat Sources of the Welding Process

There are numerous heat generators in the resistance welding process, starting with the large transformer typically located inside the machine frame, which generates heat internally as it converts incoming line voltage and current into the high secondary amperage used for welding.

Small-diameter copper water tubes are typically built into the transformer core, and there are usually at least two other circuits to cool the high voltage contactor section of the welder control.

Some resistance welding applications, especially spot welding aluminum, require as much as 100,000 secondary amps to generate enough localized heat to fuse the metal through the resistance of the material at the joint.

Additional heat is produced in the large copper conductors of the welder’s “secondary loop.” The final heat source in the resistance welding process — which can be the hardest to cool — are the electrodes that contact the material being welded.

Roof-mounted water towers have long been the most common way to supply cooling water to spot welders, but they present a unique set of problems, including inconsistent process water temperatures due to varying ambient air temperatures.

In addition, dirt and other contaminates can cause problems, such as at a Japanese-owned automotive parts manufacturer in Kentucky that had cherry trees planted all around their building. The trees were beautiful when they blossomed each spring, but the cooling tower got clogged with a cloud of blossoms that blew into the system.

Another reason why a cooling tower is not recommended for use with spot welders is that water flow is often inadequate because the central system’s pump capacity is rarely increased when additional water-cooled machinery is installed.

Other plants use well water or large recirculating reservoir tanks, sometimes cooled by radiators or even numerous bags of ice, but a self-contained water chiller is far superior, especially when properly sized for the application (Figure 3). 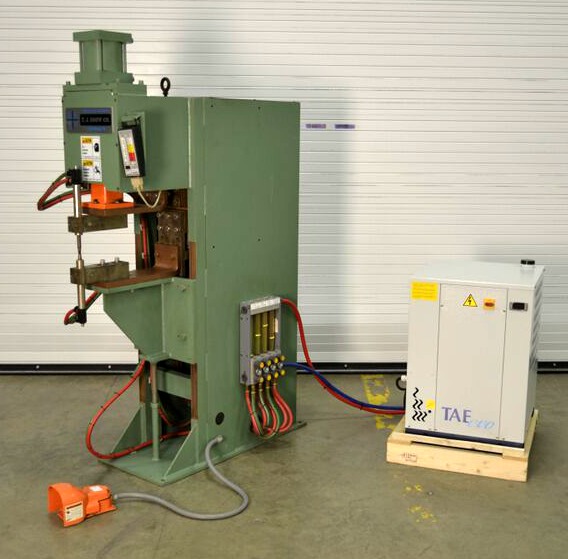 Although common sense would indicate that cooling water for resistance welders should be as cold as possible, condensation quickly becomes a problem when the prevailing dew point, the temperature at which water vapor will condense, is above the process water temperature.

Since dew point temperatures above 70°F are common during the summer months, chillers should be set to avoid internal “sweating” of the welder’s transformer, which will eventually cause it to short out.  Also to be avoided are puddles of water at the operator’s feet caused by condensation dripping off the electrode holders.

To solve the condensation problem, some chillers being manufactured today include an Automatic Dew Point Compensation feature, which is highly recommended.

The Impact of Water Flow Rate on Welding

When it comes to removing heat generated by the resistance welding process, the water flow rate is often considered more important than temperature. Therefore, it’s especially important to select a chiller with a properly sized pump and to plumb the system to minimize or eliminate head pressure caused by running water lines in the ceiling.

The ideal set up is to connect a chiller to just one resistance welder (Figure 4), or a group of similar machines located close together, and to run the lines on the floor (Figure 5). 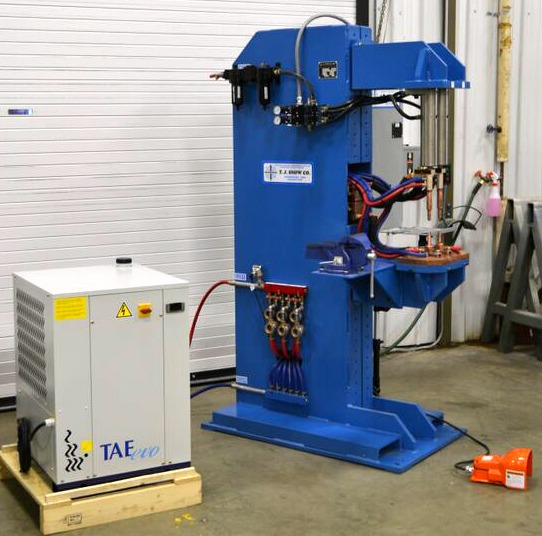 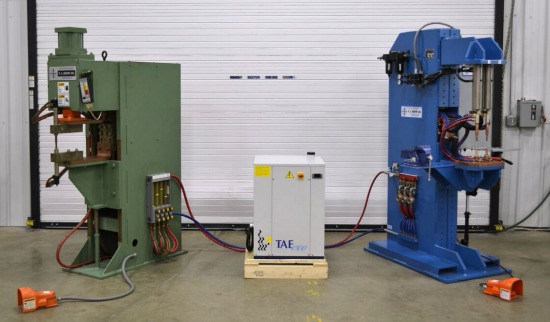 Figure 5: Self-contained chillers are often connected to multiple resistance spot welders located near one another in a work cell. Note the two different types of water manifolds and visual flow indicators used to balance the flow to multiple cooling circuits.

Selecting the proper refrigeration capacity of a chiller used with resistance welders is not always an exact science, since the welder or group of welders to be cooled may not run all the time. A good rule of thumb that has worked through the years is to specify one ton of refrigeration for each 100 KVA of welding capacity.

A large built-in reservoir tank that serves as a “thermal fly-wheel” will help prevent short-cycling, and a dual compressor system, if available, can enable one side to shut down automatically when not needed.

With continuing drought in many parts of the world, buying a self-contained chiller to go along with your resistance welder is perhaps one small way to help save the world.

At the very least, installing a chiller should improve your process and save money.