As the population continues to grow in the United States, industrial water use will need to continue to fall to help offset the increases in public-supply water use. Water-cooled compressed air systems provide an opportunity for sustainability managers to reduce associated cooling water consumption and costs. If switching to air-cooled air compressors is not possible, understanding the costs and the alternative types of liquid cooling systems is important.

Offsetting the Increase in Public-Supply Water Use in the U.S.

The report indicates that national water use remained roughly the same as in 2000 and that water use has declined 5 percent from the peak in 1980. This leveling off of demand has occurred despite the population growth of 31 percent from 1980 to 2005 (230 to 301 million people² . This population growth has led to a 33 percent increase in public supply water use over the same period. Fortunately, water use for thermoelectric power generation, irrigation, self-supplied industrial uses, and rural domestic/livestock have stabilized or decreased since 1980. 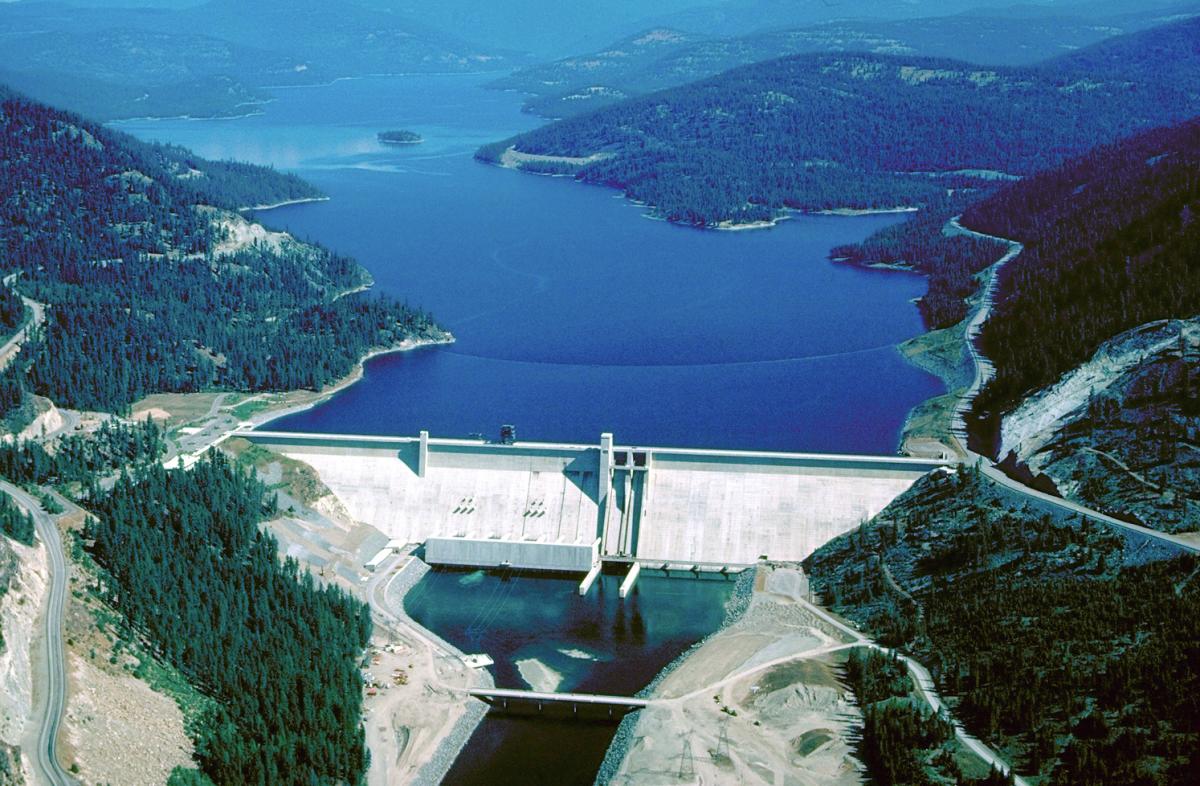 Population growth in the U.S. has fueled a 33% (since 1980) increase in demand for Public-Supply water.

Thermoelectric power has been the category with the largest water withdrawals since 1965, and in 2005 made up 49 percent of total withdrawals³. Thermoelectric-power water withdrawals peaked in 1980 at 210 billion gallons of water per day and were measured in 2005 at 201 billion gallons per day. Partially due to sections of the Clean Water Act, that were amended in 1972, power plants have increasingly begun to use wet recirculating cooling systems (cooling towers or ponds) and/or dry recirculating cooling (air-cooled) systems instead of using once-through cooling systems. This has played a leading role in reducing demand for water in power plants.

Irrigation is the second largest category for water use and is also declining. Estimated water use in 2005 was 128 billion gallons of water per day – down 15 percent from the peak in 1980 and representing 31 percent of total use.

Public supply refers to domestic, commercial, and industrial users of public water supply systems. Public supply water use was 44.2 billion gallons of water per day in 2005 – up 33 percent from 1980. This is a reflection of the population increase over the same period of 31 percent.

Industrial water use includes water used for such purposes as fabricating, processing, washing, diluting, cooling, or transporting a product; incorporating water into a product, or for sanitation needs within the manufacturing facility. Some industries that use large amounts of water produce such commodities as food, paper, chemicals, refined petroleum, or primary metals. Water for industrial use may be delivered from a public supplier or be self-supplied. Stricter water-quality standards for water discharges, mandated by the Clean Water Act, may have also encouraged water conservation. The data taken from this U.S. Geological Survey looks at self-supplied industrial water⁶.

Self-supplied industrial water use was 31 billion gallons of water per day, a decrease of 31 percent from 2005 to 1980. 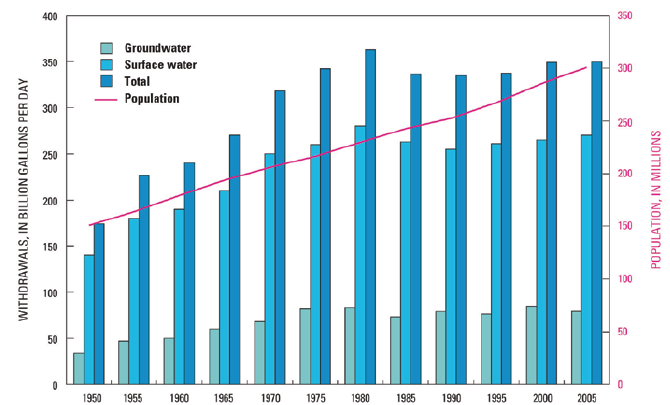 Most air compressors are designed to receive cooling water, at the required flow, with a maximum inlet temperature of 100ºF and expect maximum discharge water temperatures of 120ºF to 130ºF. These values should be kept in mind when evaluating any compressor cooling system.

With the exception of large water-cooled reciprocating compressors, most rotaries and centrifugal air compressors have relatively high pressure losses through them when compared to many others commonly fluid- cooled industrial pieces of equipment. Whenever possible, each compressor (or group of compressors) should be on their own system to avoid other pressure losses affecting the flow to the air compressors.

An effective trim cooler should be well controlled to effectively modulate the flow and manage the power use. Often these trim coolers are sized to be able to handle 100% of the load and keep the equipment running in the case of an emergency.

The energy use of the circulation pumps is a function of the flow volume and the head. Poor fluid piping, sizing and configuration can add pressure loss and head. Installing the cooler farther away from the compressors or on the building roof will also usually increase the cooling fluid “head” and require larger pumps.

Recirculation cooling water ponds are an option for a locally controlled cooling water system supply. As long as the pond is large enough to handle the heat load under the worst condition and maintain an acceptable temperature, it can be very effective, particularly in large installations. They do have some inherent limitations:

A trim cooler is a smaller heat exchanger to be used only in times of excess or peak heat loads. They are installed to complement a larger system designed to handle all cooling need 85-90% of the time. A trim cooler can allow a facility to go with a lower water consumption system by being there as an emergency back-up during high heat load periods. A trim cooler might be a shell and tube heat exchanger or a cabinet-enclosed chiller.

These coolers are closed loop cooling systems usually using an appropriate water (60%) and polyglycol (40%) mix (one-time fill) passing through finned tubes. The coolers are in modules - each with a small fan for air- cooling. As the heat load is reduced, the fans are shut-off individually as required and brought back on when needed. Dry air cooling systems are usually available from 160,000 btu/year rating at 250 cfm class to 4,000,000 btu/hr rating at 6,000 cfm class - with special sizes for other levels.

The air-cooled heat exchangers can be manufactured to deliver a 2ºF approach temperature but economics usually dictate a 5ºF approach. This means in parts of the country they may be able to handle a reciprocating compressor’s cooling needs with little or no trim cooling. Dry air cooling systems, when combined with a trim cooler, can provide factories with a very low-cost and reliable alternative to water-cooled machines.

The cooling water system requiring the lowest capital costs is the open tower type. In this system, the heated return water flows down a controlled open path where it is cooled by continual evaporation by moving ambient air from a fan and pulling an evaporating water percentage into the ambient air. These towers will have a smaller circulating pump to move the water through the cooling area and a large horsepower electric motor fan to move ambient air over and through the cooling water to optimize the evaporation cooling. There is also a flushing or blow out system using water.

The primary benefit of this type of system is that as the ambient temperatures increase, generally so does the evaporation rate which means, in most North American locations, they will deliver about 85ºF temperature cooling water when operating properly within their design limits.

Open tower coolers are very prevalent throughout industry and are often known affectionately as very effective “air washers” meaning they remove the dirt and impurities from the ambient air, generating a continual cleaning of the tower.

The contamination factor, along with the high level of make-up water required, makes proper and diligent water treatment and condition monitoring a prerequisite for a successful installation. Open towers also inject oxygen into the process water system which may or may not create corrosion or other maintenance issues.

In this type system the primary coolant is sealed in a closed loop system - unexposed to ambient air, it may be water - but it more often is a glycol water mix appropriate to the local ambient cold temperature limitations. This is very good for the equipment being cooled since it runs for a significantly long time without significant water treatment requirement or replenishment.

The cooling system is equipped with a motor driven spray pump and spray header which delivers a spray over the air cooled heat exchangers during hot weather and creates evaporation auxiliary cooling similar to the open tower described earlier.

Closed Loop Cooling with Evaporation systems experience additional water use, the magnitude very much dictated by the ambient conditions. There is also a motor driven coolant circulation pump and motor drive main cooling air fan similar to the open tower. The standard pumping station is also required. Some flushing or blow may also be required.

Depending on design and operating conditions, this type of cooling towers use parallel flow or cross flow or counter flow. Compared to an open tower with evaporative cooling, the closed circuit cooling system has a higher initial cost but also some advantages which may be significant when the operating conditions dictate.

In a compressed air system the process water must be capable of full capacity throughout the year. This means maintaining a clean, reliable cooling fluid loop is critical. To do this in an open tower requires proper and diligent water treatment and maintenance. The closed loop system is basically isolating the compressor cooling fluid from all air ambient out borne contaminants: 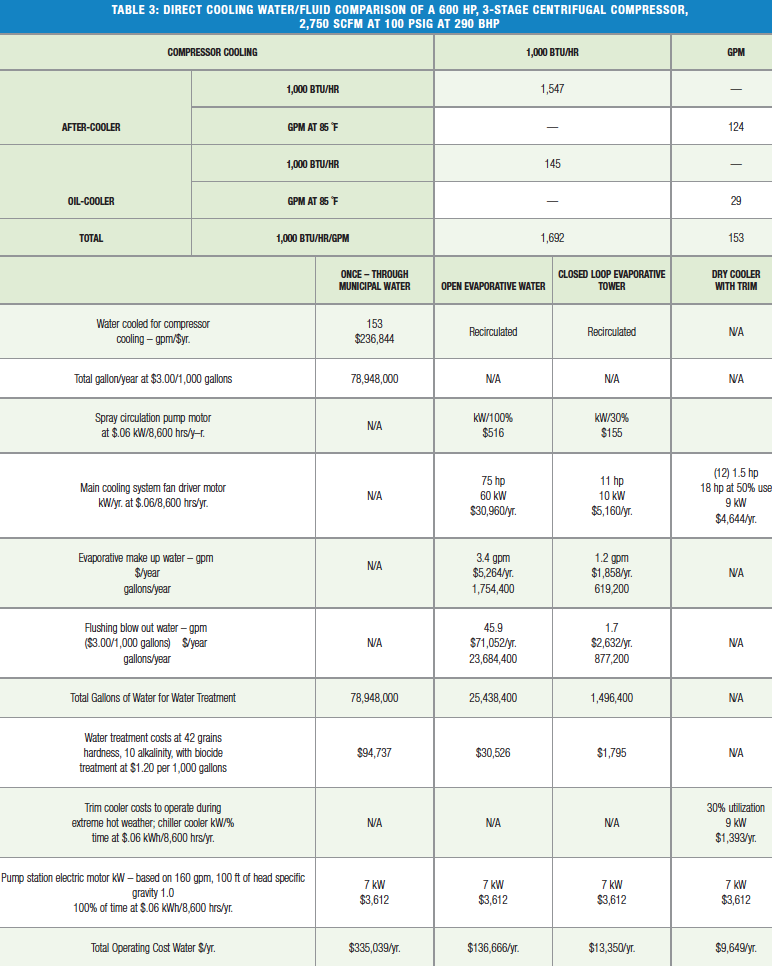 As the population continues to grow in the United States, industrial use will need to continue to fall to help offset the increases in Public-Supply water use. Compressed air systems provide an opportunity for energy managers to reduce associated cooling water consumption and costs. Understanding the costs and the alternative types of cooling systems is an important first step.

All options are preferable to “once through” municipal water. The ever-growing regulations and controls will just further increase these costs. The true cost of the open evaporative tower and the closed loop evaporative tower can be driven much higher with more significant water treatment cost, water disposal regulations, sewer costs and surcharges. If a facility can’t simply convert a water-cooled air compressor to an air-cooled air unit, a dryer-cooler system (with trim) has the lowest costs and very predictable results.