When the topic of discussion is making ice cream, the first thing that comes to mind isn’t heat, but at Nestlé’s Ice Cream factory in Tulare, California, heat is recovered from air-cooled air compressors to heat process water.

“Right out of the gate, everything is pneumatic,” explains Tom Finn, Project Engineer with Nestlé Ice Cream Division. “Air cylinders and air driven motors, the process piping valves which divert, route, stop/start, and mix process fluids, our packaging machinery including rejection, cleaning and vapor removal processes, all of these rely on compressed air. If we don’t have compressed air, we’re done. As a food processor we chose oil-free compressors with filtration and drying systems to ensure that our compressed air stream is free of moisture and particulate. What is required is clean dry air to prevent product contamination.”

According to Finn, the Tulare plant has four 125-horsepower Kobelco KNW Series oil-free air-cooled screw compressors. Two compressors are typically running 24/7. When demand rises and pressure drops, a third compressor comes on automatically. The fourth compressor allows Nestlé to rotate compressors in service and provide redundancy to ensure a continuous air supply even if one compressor is off-line for maintenance.

Air leaving each compressor passes through a moisture separator, then a regenerative-type dual tower dryer, and then to a dry air receiver tank that serves as a pressure buffer to help minimize compressor cycling. Clean, dry air exits the receiver into the piping network for use as part of the process throughout the plant.

On its own, Nestlé’s compressors are fairly typical of oil-free systems used in food processing environments. What makes this compressed air system unusual, however, is its innovative method for recovering and reusing the heat of compression. 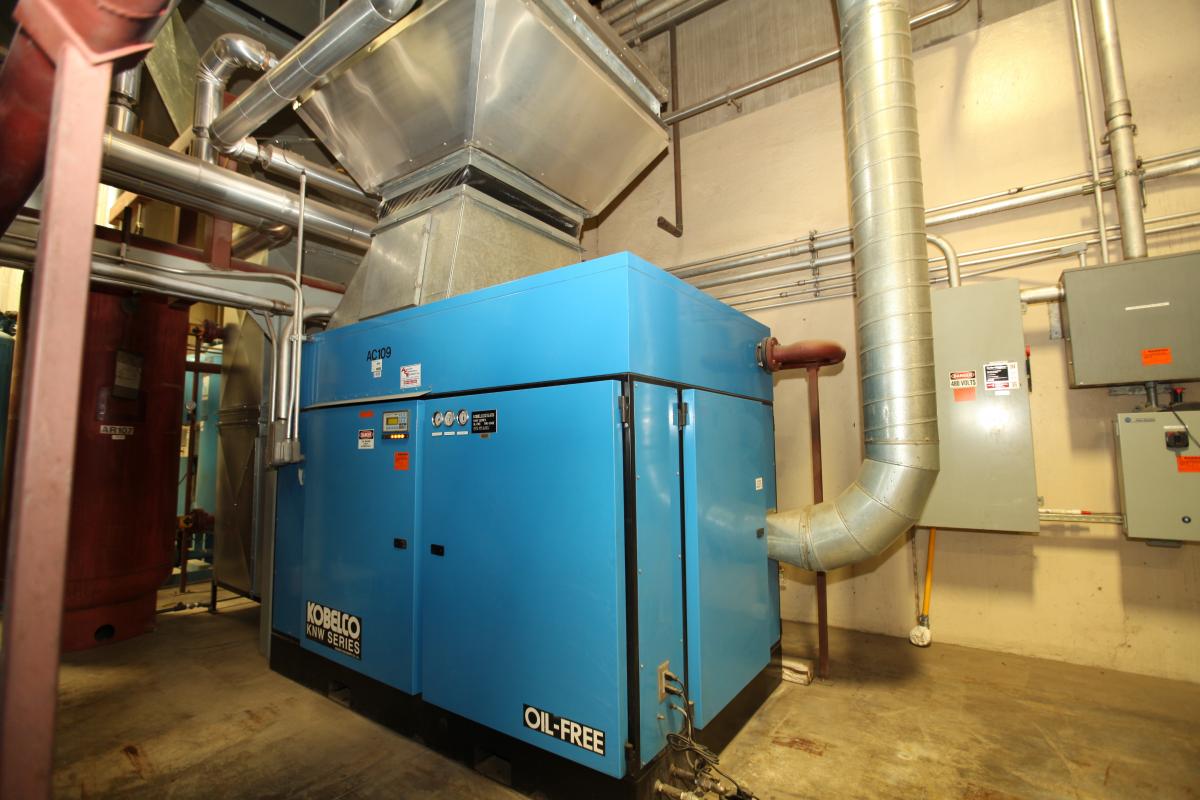 One of four Kobelco KNW series oil-free screw compressors at Nestlé’s ice cream factory. Note the air-to-water heat exchanger in the ductwork above.

The story begins in the mid-1990s when Nestlé began a phased replacement of its existing oil-free reciprocating compressors, which were experiencing unacceptably high maintenance costs and down time.

“The recips were old technology in a hot room, which was a bad combination,” according to Lane Hawkinson, National Sales Manager Kobelco KNW Series Oil-Free Air Compressors for Rogers Machinery Company, Inc., of Portland, Oregon. “Nestlé bought their first Kobelco in 1996, then a second in 1998, and two more in 2001. Each Kobelco rejects 11,500 cfm of air at 160°F with high potential for heat recovery.”

An initial cooling plan for the air compressors involved simply ducting the cooling air out the roof. That would dramatically reduce the heat load inside the utilities area, but Nestlé’s global commitment to energy efficiency presented Finn with a challenge and an opportunity: instead of just rejecting all that heat, could it be put to work?

A common method to recover heat rejected from air-cooled compressors is to direct the warmed air via ductwork to a large space, such as a warehouse or garage, to provide interior heating. The need for low quality heating like this is seasonal, however, and because the heating season in California’s Central Valley is short, most of the time the heat still would be vented outdoors. Rather than settle for low quality heat used seasonally, Finn conceived of a system to recover BTUs rejected from the air-cooled compressors to heat water.

“Nestlé is highly tuned into resource conservation,” Finn explains. “In Tulare we’re already at the stage of the game where we’ve pulled the low hanging fruit, so we have to be more creative in finding ways to capture energy savings. With heat recovery from the compressors, I was looking at energy we can use year round, so I had to think about what we use year round in a food production facility. The answer was hot water. We have many hot water stations around the plant for washing, sanitary systems, waste systems and a lot more, and demand for hot water is ongoing.” 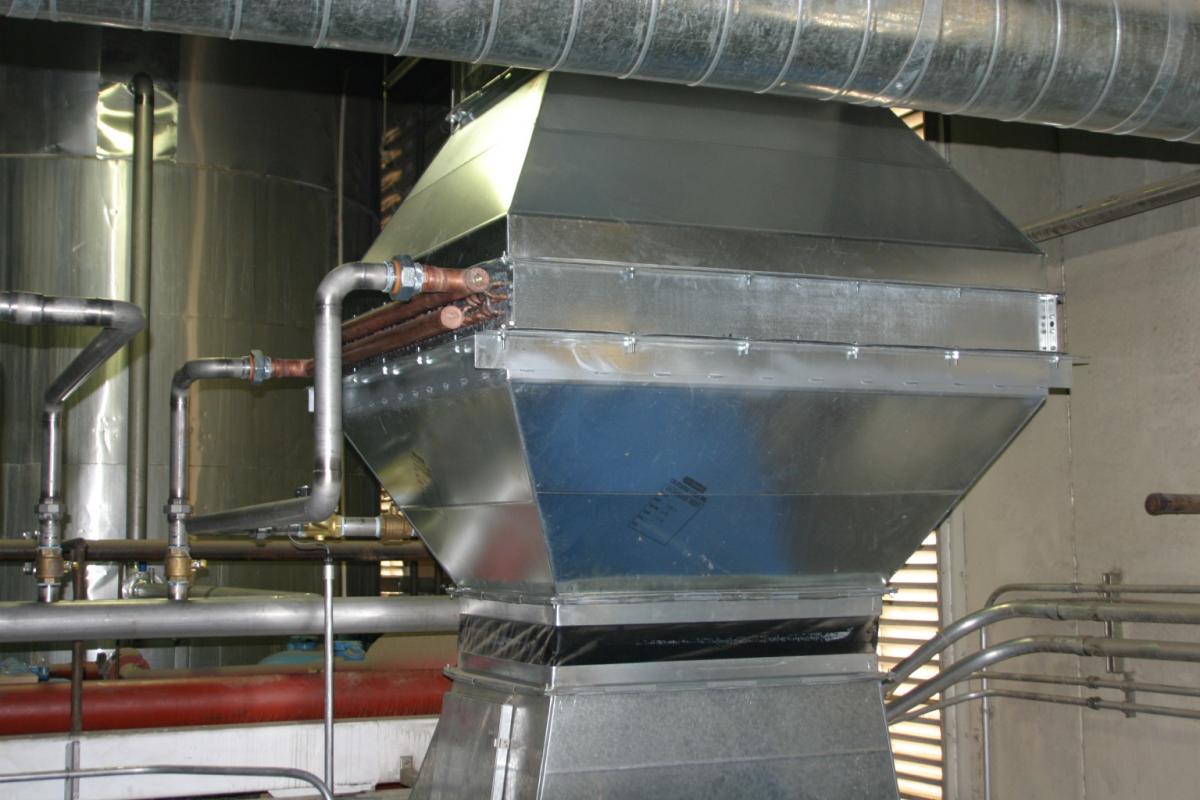 Heat coming off the air-cooled compressors is ducted through finned coils that transfer more than 350,000 BTUs per compressor per hour to preheat the plant’s hot water makeup supply.

It’s not unusual to recover heat from water-cooled compressors to produce hot water, but Nestlé’s Kobelco compressors are air-cooled. What makes this heat recovery project unusual and innovative is the use of air-to-water heat exchangers.

“To capture energy for heating water, we needed a more specialized approach,” Finn recalls. “I believed we could accomplish this by employing air-to-water heat exchangers. When I first discussed the idea, people said, ‘You want to do what? How is that going to work?’ It was one of those times when you turn your engineering cap around and make it a sales cap because you need to sell an idea to management.”

As Finn explained to plant managers, heat rejected from each operating compressor, amounting to more than 350,000 BTUs per compressor per hour, would be scavenged in an 11,500 cfm air flow and fed via ductwork through a finned coil much like a car radiator. Water from the plant’s hot water make-up supply would flow through the coil and pick up heat rejected by compressor. Water exiting the coil would be warmer than when it went in, so less natural gas would be required to raise the temperature of water for the plant’s hot water applications. Each compressor would have its own heat exchanger and the heat recovery process would operate, in series, whenever a compressor was running.

Finn developed the make-up water recirculation system and a colleague designed the air-to-water heat exchanger coils, but some additional system engineering was required. “We determined that the compressor’s heat rejection fan, which pushes air across the compressor to cool it, was going to need help moving sufficient air through the coil to maintain the efficiency of the rejection system,” Finn explains. “Our solution was to add an assist fan downstream of each coil to pull the air through. We got in touch with Lane Hawkinson from Rogers Machinery and he and their engineering department helped us by providing some numbers regarding air flow and pressure drop. I estimated how much water runs through each heat exchanger and made adjustments to the flow rate until I reached an optimal setting. A variable frequency drive on the pump made this precise adjustment possible. It runs at 46 Hz to pick up maximum heat.”

Hawkinson points out that he has been involved with many heat recovery projects involving air compressors, but until he talked with Finn he never had heard of an air-to-water heat exchanger positioned inside a duct. “Nestlé needed to get heat out of a room, and now on the way out it pays a visit to a heat exchanger,” says Hawkinson. “It’s a great idea that Tom Finn and Nestlé executed very well. Nestlé has been a customer since 1996 and the machines have been running trouble free for years. We are always glad to provide technical information to help maximize the efficiency of customer installations.”

Finn points out that actual heat gain varies, although on a June day when he checked the water temperature was 80°F going into the heat exchangers and 107°F coming out. “Our target for temperature gain was 20 degrees,” says Finn, “so anything we get above that is icing on the cake.” 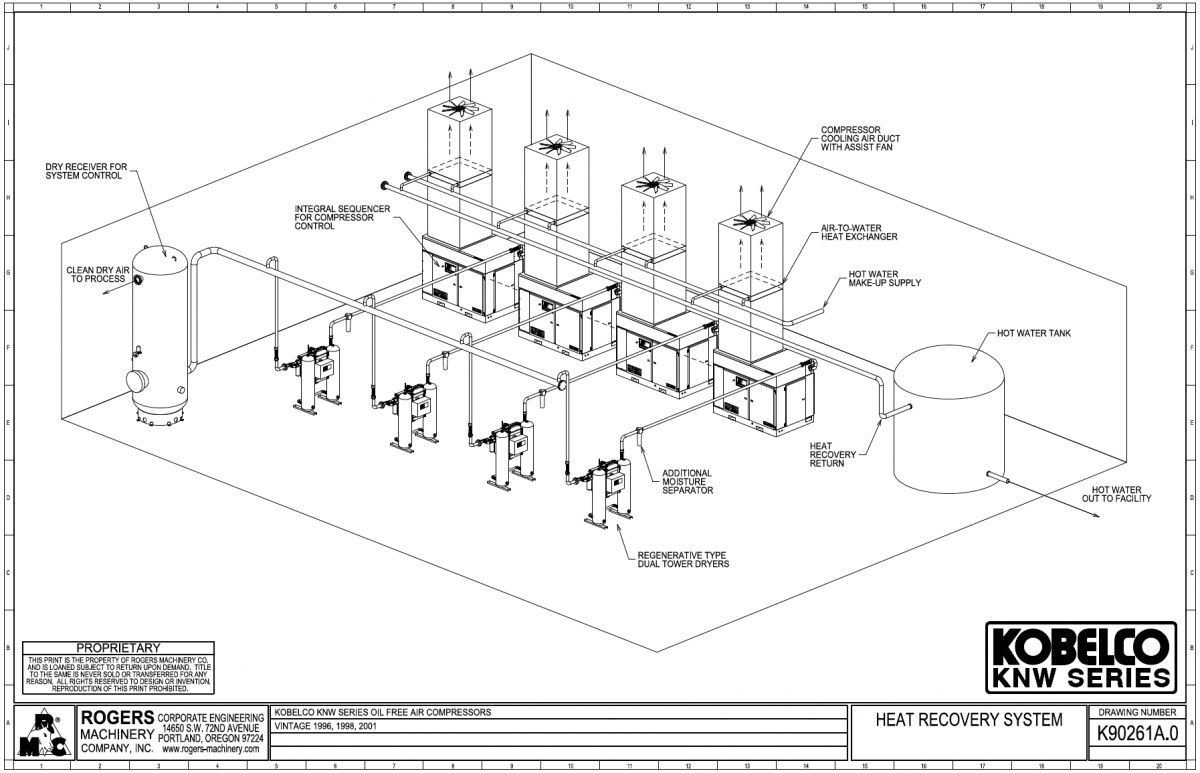 Finn calculates the total cost for the heat recovery system at $150,000 including touchscreen controls for the pumps and diverter valves. The reduction in natural gas consumption because the intake water is preheated amounts to 309 therms per 24 hours. The project’s payback period was initially estimated at 3.8 years, but that turned out to be too conservative as payback occurred in just over 3 years.

Finn attributes his insight into energy savings to his previous work in ship building. “On a ship you have to use every watt,” he says. “I just started thinking that way and never stopped. This heat recovery project was another application of that kind of thinking. Another project I’m looking at involves the heat recovery system’s assist fans, which are not variable frequency drive. Over time we have found that they don’t need to be running full speed all the time. We have plans to upgrade our evaporator fans with VFD motors elsewhere in the plant, and when we do we will upgrade the assist fans to VFD.”

One of Nestlé’s global goals is to become the most efficient energy user among the food manufacturers and this project is a good step on that journey.

To read similar articles on applications in the Food Industry, visit www.coolingbestpractices.com/industries/food.