An Illinois protective packaging manufacturer was able to reduce their cooling costs by over 60% while also saving around $100,000 each year on system maintenance by replacing their old system with high-efficiency equipment and a streamlined hydronic design. Helped by ComEd efficiency incentives, the plant captured these benefits through an under 2.4 year payback system upgrade project.

In addition to the energy savings, the plant has improved their process stability and reliability while simultaneously greatly reducing their maintenance labor and their equipment capital replacement costs. This article will describe the changes made and highlight lessons learned from the project. 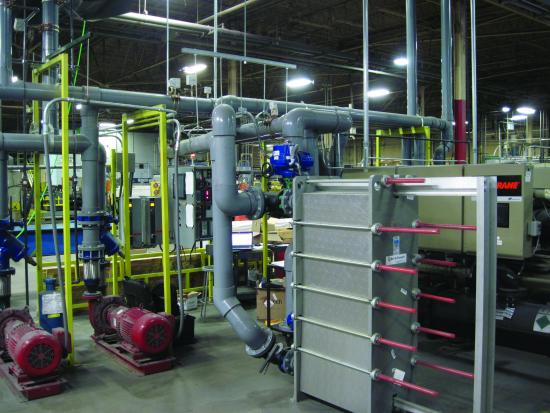 The new chilled water system equipment: free-cooling heat exchanger in foreground and two chillers in back.

Like many plants, the manufacturer had a fragmented cooling system that had grown up over the years in steps as more cooling was needed for additional lines. Efforts to tie the four chillers and associated pumps into shared loops resulted in a hodgepodge of tanks, pumps, and chillers that were difficult to operate, maintain, and expand.

The system had a total chilled water (CHW) capacity of 210 tons from four air-cooled chillers with sixteen hermetic scroll compressors (four per chiller). Ten CHW pumps were installed along with three separate CHW tanks – a main collector tank and two hot well / cold well tanks. Four pumps ran when the chillers were on even when the plant load was zero, with resulting efficiency and maintenance impacts one would expect.

The chillers alone averaged over 1.0 kW per ton efficiency year round, with summer peak design efficiency nearer 1.2 kW per ton. The multiple pump loops resulted in pump power of nearly 0.5 kW per ton for the typical running loads such that the overall system efficiency was just under 1.5 kW per ton (note lower is better with kW per ton metrics).

In addition to the poor overall efficiency, the system was subject to variations in CHW supply temperatures and, even more inconsistent, significant swings in pressure to the floor depending on which lines were running and which pumps were on. To satisfy the process requirements, the system had to run with cooler water temperatures and higher pressures than would otherwise be necessary, contributing to the poor overall cooling efficiency.

Making matter worse, the cooling system equipment itself was old and inefficient, prone to frequent failures, and costly to repair. Remote air-cooled refrigerant condensers were installed on the roof of the plant, leading to long refrigerant lines, frequent leaks, and difficult access for repairs. The multiple small scroll compressors were not designed for 24 hours / six days per week operation under real plant circumstances (e.g., refrigerant charge conditions, oil levels, power quality, etc.) so the plant was replacing three to four compressors every year. 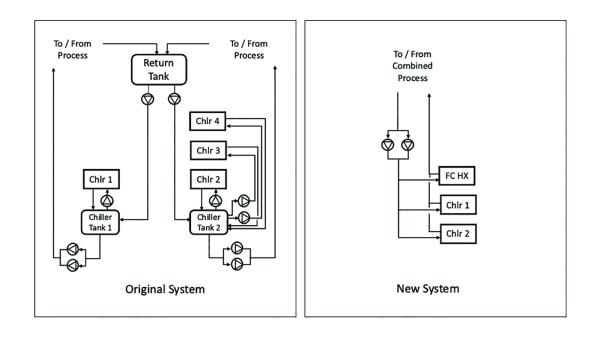 Integrated Services Group (ISG) was contracted to review the systems for potential efficiency and operational improvements. A detailed site study was conducted that catalogued the system equipment and design along with collecting extensive system operating data. This included one minute interval trends of key operating data (e.g., loop flows, pressures, temperatures) for 24 hour-plus periods on each subsystem and loop, and month-long amp logging to support an efficiency incentive application through the local power supplier.

A range of options for improvements emerged from the study, from modest changes like adding VFDs and making minor control changes to major renovation of the systems.

Due to the (unfortunately) very poor efficiency of the incumbent system, all the prospective approaches offered savings to the plant, many of which would meet the corporate threshold for funding (≈2.5 years simple payback or less). Fortunately, corporate management was willing to fund more extensive improvements if the cost could be justified through a combination of energy savings, efficiency rebates, and maintenance savings.

After evaluation and review with corporate management, the client decided to completely replace the existing air-cooled CHW system with a new water-cooled system that would also incorporate comprehensive efficiency and reliability measures beyond just the chiller changes.

Once the decision was made to install a completely new cooling system, detailed choices were needed for the specific design principles, component sizing and features, location in the plant, etc. The replacement system includes the following:

When considered as a whole, the cooling system upgrades can be viewed as three broad improvement strategies. First, there are piping design changes to eliminate excess & unproductive flows in the mechanical plant and improve the opportunity for efficient operation. Second, the cooling technology was changed to dramatically lower operating costs and maintenance requirements. Finally, the implementation details (e.g., equipment layout, component sizing & count, control functions) were tailored to maximize the effectiveness in the context of the particular plant.  Each of these elements is discussed separately below. 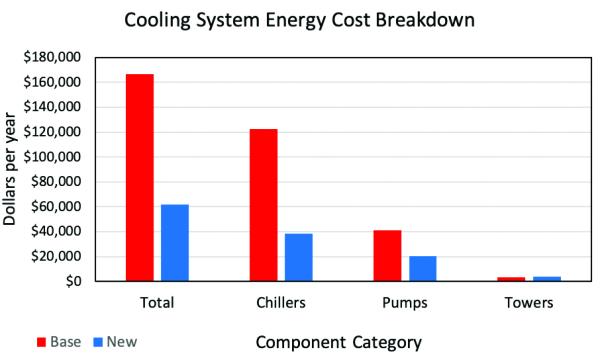 The as-found system included multiple recirculation and balancing flow loops, in addition to split plant floor process cooling piping loops, and was difficult to operate and maintain (even more so to fully understand). Specific problems included:

ISG recommended changing to a single-loop, variable flow design that dramatically reduced the complexity of the flows and component count required while also needing less floor space. By combining the flows, fewer larger pumps could be used that also had notably higher efficiencies than the multiple small pumps originally used (eight pumps before, three after [including tower water pump] under normal conditions).

Note that caution was required to ensure the system included minimum flow applications. Furthermore, the newly installed chillers (discussed below) were equipped with on-board controls able to handle variable CHW flows as well as automatic isolation valves to disable their respective flows when not needed during light load conditions.

The consolidated CHW process piping system further supported the implementation of differential pressure (DP) control which, with the improved temperature control, greatly improved the process cooling consistency.  These combined benefits are harder to quantify than the energy savings but are actually more meaningful to the plant operations staff as it supports more consistent quality and productivity from the production lines. 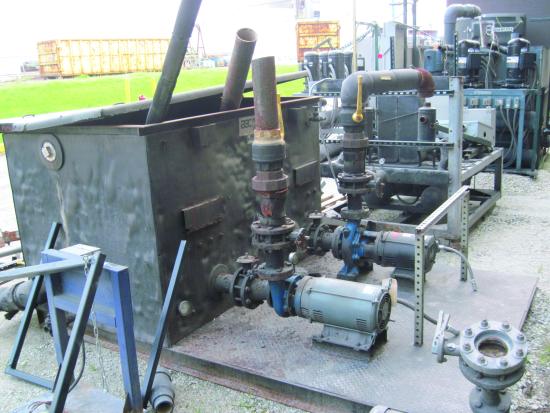 Changing to water-cooled chillers required increasing the plant’s cooling tower capacity.  The existing system was appropriately sized for its specific process cooling function so a new tower was added for the condenser cooling and free cooling heat rejection. Having a separate unit also allows the new tower to run at the much cooler temperatures needed for free cooling while leaving the original tower cooling conditions undisturbed.

The northern Illinois climate combined with the 55°F CHW supply temperature mean that cooling can be provided through the free cooling (FC) system around 2500 – 2800 hours per year, depending on the actual loads at any given time and the wet bulb ambient condition.  When in FC mode, only the tower fan and lead tower and CHW pumps are required (i.e., no mechanical refrigeration cooling). Not only is this highly efficient, it also significantly lowers the annual operating hours of the chillers which in turn reduces their maintenance requirements and extends their useful lives.

The two 110 ton chillers have modulating condenser flow valves controlled from their internal head pressure differential.  This control has ensured smooth startups of the chillers with no issues from cold condenser water when starting from FC operation.

The chillers also have two compressors each, providing redundancy as each chiller can run with one compressor off or out of service and they were sized so that 3 of 4 compressors covers the peak loads.  With compressor rotation by the chiller controls and the thousands of yearly hours the chillers don’t run due to the FC, the compressors should be trouble free for many years.

When viewed as a whole, the total annual average system efficiency, including both chiller and FC cooling with all tower and pumping loads, is around 0.475 kW per ton, a stunning 36% of the initial system efficiency. 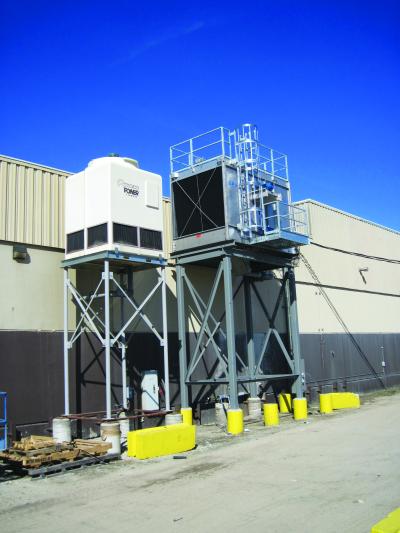 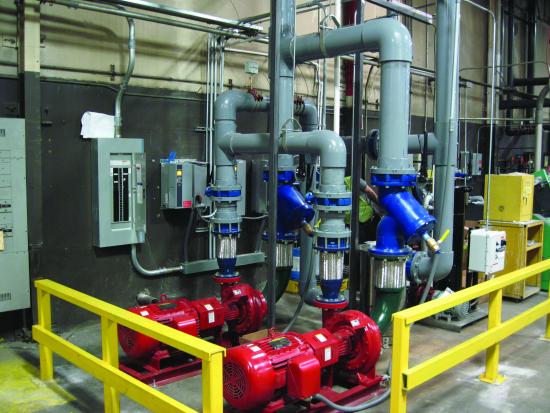 Once the system design and cooling technology were determined, the implementation details had to be confirmed. Key goals were to minimize the transition impacts, facilitate the staff’s ability to use the new system, and automate as much operation as could be reasonably accomplished to maximize the system’s realized benefits. These were accomplished through multiple measures including the following:

As a result of the changes, the system operation manpower requirement has been reduced by over 80%. The system now requires less than a full man-day each week for start / stop operation and routine maintenance, down from requiring essentially one full time technician with periodic help. Contractor support requirements have been reduced by over 90% and are now largely scheduled maintenance.

The plant has realized dramatic energy and maintenance cost savings as described above.  In addition to qualifying the plant for an efficiency rebate of nearly $85,000 the plant also realized the following broad scope benefits:

Around a year after the new system began operation, the plant engineer was extremely complimentary, saying, “The system is working as designed without any issues - it has been a blessing.”  To ISG, this is the ultimate indicator of the project success.

Visit our Webinar Archives to listen to expert presentations on Chiller Technology at https://coolingbestpractices.com/magazine/webinars.