In recent years, the HVAC industry has witnessed the evolution of three distinct approaches to advancing energy efficiency. For decades, the industry focused on improving full-load efficiency before the current shift to part-load efficiency standards for equipment. Today, new part-load rating methods better account for how equipment operates at off-design conditions when loads vary hour by hour. The next stage in the evolution of building energy efficiency will focus on whole building efficiency for facilities.

This first installment of a two-part series will examine the evolution of equipment-efficiency standards from full to part load and their relationship to whole-building efficiency. The second article will look at how HVAC technologies are advancing to modulate capacity to match variations in building loads, a major factor in improving whole-building energy performance.

The energy performance of buildings is expected to improve significantly in the decades ahead. From 1980 to 2009, for every percent of growth in U.S. commercial building space, primary energy consumption grew by 1.19%. The U.S. Energy Information Administration estimates, however, that from 2009 to 2035, every percent of growth in space will increase energy consumption by only 0.79% — a 33% improvement in energy savings.

That raises the question: How will those predicted energy savings be obtained?

Considering that approximately 40% of the energy in commercial buildings is consumed by HVAC equipment, it's reasonable to conclude that mechanical system efficiency will have to improve substantially to achieve those results. Consequently, HVAC equipment designers must look for new solutions to old challenges. To improve the efficiency of mechanical equipment, system designers face the perennial thermodynamics problem: how to move heat from one place to another using the least amount of energy.

Inside a building, heat is generated by people, processes, equipment, and lighting — factors that constitute the internal load. Outside, the climate and thermal performance of the building's exterior — including the amount of insulation, number of windows, and whether the building is north or south facing — comprise the external load. A building designer can reduce the load by improving the building envelope and cut energy consumption by employing mechanical equipment with the flexibility to modulate capacity at lower loads. 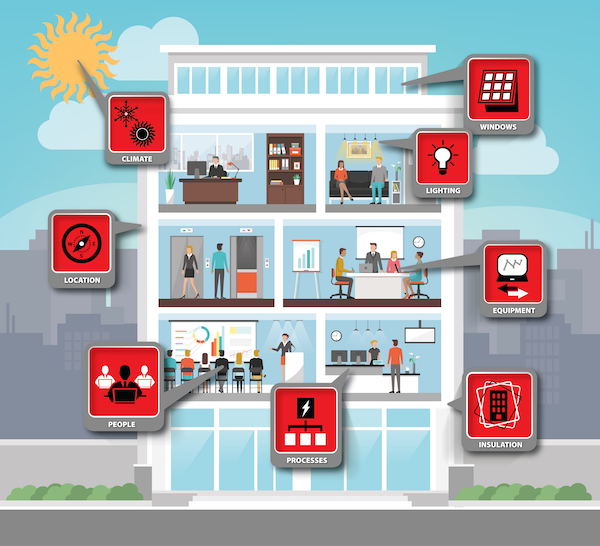 In some facilities, however, HVAC systems operate at full capacity and are simply switched on and off as cooling is needed. Accordingly, over the last few decades, system designers have improved the full-load efficiency of equipment. In fact, since 1980, average chiller full-load efficiency has improved more than 35%, despite the adoption of less efficient refrigerants. Advances in refrigeration compressors, heat exchangers, cooling towers, fans, and pump motors have achieved significant improvements when the system is running at 90 to 100 percent of its designed capacity.

The trouble is, most buildings experience internal and external loads that vary throughout the day. Consequently, buildings with systems optimized only for full-load operation are wasting energy when the loads fall below 90%.

Because off-design conditions can occur as much as 99% of the time, a lot of energy can be wasted by systems optimized for full-load operation. To save that energy, systems must be designed for part-load operation. At lower loads, cooling capacity can be reduced or "turned down." Methods that can be used to turn down capacity exist today, such as employing manifolded compressors, reducing fixed-speed compressor power consumption at part-load, and using variable-speed compressors, fans, and pumps. These technologies will be discussed in the second article in this series. 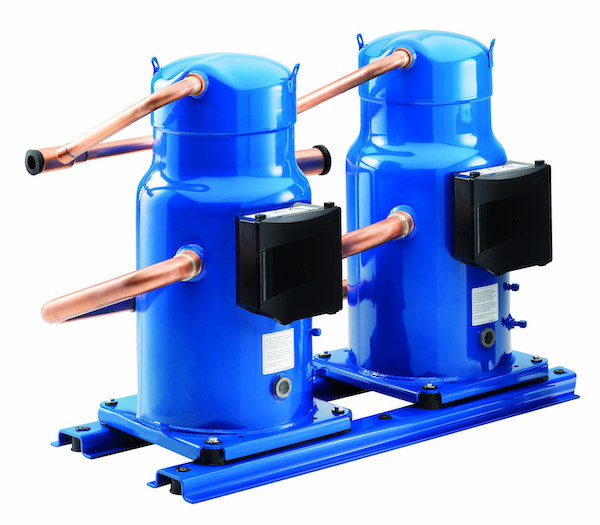 Shown are Danfoss scroll compressors SH in a parallel installation.

Meanwhile, the American Society of Heating, Refrigerating and Air-Conditioning Engineers (ASHRAE) develops test methods and efficiency minimums, and the Air-Conditioning, Heating, and Refrigeration Institute (AHRI) develops the performance rating for an application. Their work together influences the design of rooftop units, chillers, and other air-conditioning applications prominent in the United States. Similarly, the International Ground Source Heat Pump Association (IGSHPA) has led the way in providing a complete set of standards for GSHP systems.

Although significant energy savings can be obtained by applying advanced technologies and system designs, the amount of savings depends on the specific technologies and the particular application.

Consequently, technical committees for some industries are developing their own building-efficiency standards to encourage the use of equipment optimized for part-load operation.

For example, data centers are recognized for using substantially more energy than office buildings. Because data centers run 24 hours per day, seven days per week each year at varying loads, systems optimized for part-load operation can realize energy cost reductions of 30% or more. These facility standards use a unique measure of "power usage effectiveness" (PUE) for the facility, which takes into account new HVAC technologies, the part-load efficiency of systems and various cooling strategies. PUE simplifies cost budgeting and estimating data center infrastructure efficiency (DCiE). Both measures were developed by The Green Grid, an association of IT professionals aiming to raise data center energy efficiency.

This indicates how whole-building efficiency and technology standards are evolving together. New standards are being created and existing standards are being revised for different applications within an energy-efficiency ecosystem. The goal is to improve equipment efficiency, as well as the equipment rating method, to reflect more closely real-world operation. As equipment standards define particular test methods used within the HVAC industry, these developments influence the definition of relevant regulatory requirements and energy mandates in the public sector.

As a microcosm, the data center industry shows equipment standards and a whole-building approach are co-evolving. Likewise, other private and public sectors are taking complementary paths that are improving equipment efficiency standards.

These developments are not happening in isolation. In California, the Title 24 Standard Energy Efficiency Standards for Non-Residential Buildings sometimes mirrors and sometimes modifies the ASHRAE 90.1 Standard. From 1998 to 2008, Title 24 increased required chiller efficiency by 25%. A similar increase in chiller efficiency was mandated by the 2013 Title 24 Standard. These changes coincided with changes to ASHRAE 90.1 Standard itself.

In 2003, ASHRAE adopted a part-load efficiency rating method known as the Integrated Part Load Value (IPLV) described in ANSI/AHRI Standard 550-590. IPLV was developed by AHRI to rate the performance of systems capable of capacity modulation at part loads. IPLV rates a system's cooling efficiency over a hypothetical season rather than at a full-load point at the worst time of the year.

Over the years, the part-load IPLV rating method — and more recently IEER — has undergone significant improvement, but the HVAC industry recognizes that shortcomings remain. Consequently, new test methodologies are under consideration. The short-term goal is to develop standards that include more rating points and more complex mathematics to model performance over a continuum of conditions.

The AHRI technical committee on compressors, for example, continues to investigate new mathematical polynomials to model variable-speed compressor performance curves. Finding better-fitting polynomials will more accurately describe what compressors can do. Equipment designers can then plug these expressions into simulation programs to get a better idea of how a system will perform in different conditions.

However, using multi-factor formulas to rate a system using two fixed-speed compressors can yield the same result as a variable-speed system, but miss the full energy-savings potential with variable speed technology. Also, the formulas don't have the flexibility to account for changing building loads encountered in different climate zones. 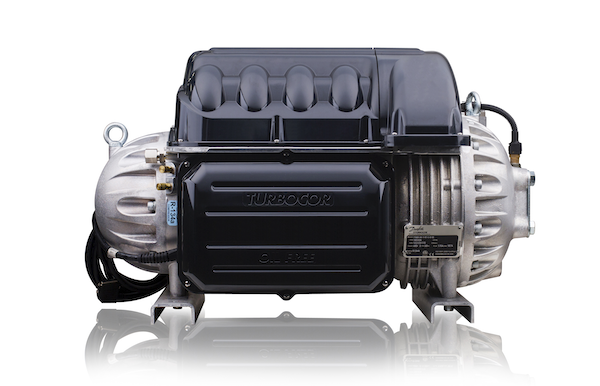 While AHRI and ASHRAE ponder these issues, further improvements in equipment efficiency are being spurred by other public initiatives:

* In 2014, the U.S. Department of Energy Notice of Proposed Rulemaking (NOPR) proposed further developments that would lower commercial rooftop air conditioner energy use by about 30%. This proposal would save 3.5 trillion kilowatt-hours over 30 years, achieving the largest national energy reductions of any standard ever issued by DOE.

* The Consortium for Energy Efficiency (CEE) is promoting high-efficiency equipment specifications and quality installations by using an elevated tier rating system based on SEER, IEER, EER, and HSPF metrics.

Compared to equipment efficiency standards, a whole-building-efficiency approach looks at the big picture and is gaining momentum. The focus is on how mechanical equipment impacts a building's Energy Use Intensity (EUI). This approach gives system designers a simpler and more useful measure of a system's actual annual energy usage in the building at real-world conditions.

The whole-building perspective also provides very valuable feedback that drives improvements in equipment efficiency standards. For example, from the equipment point of view, a system using tandem fixed-speed compressors and another using variable-speed compressors can both be rated 16 IEER. But the latter system with variable speed technology matches the temperature setting and the building load with significantly less on-off cycling, which improves building energy performance.

When a more holistic calculation of a building’s operational and energy lifecycle costs is employed, it changes views about value. Instead of looking mainly at the first cost of HVAC equipment, the focus shifts to the operational energy savings that the equipment delivers in an actual application.

As with part-load rating methods for equipment, significant advances are being made in whole-building rating programs as evidenced by:

Alongside these developments, initiatives not directly bearing on the HVAC industry are raising expectations of what can be achieved:

Whether it's within the microcosm of a particular industry, such as data centers, or a macro sector like public buildings, a whole-building-efficiency approach and metrics are evolving rapidly. That trend, in turn, is spurring the co-evolution of equipment efficiency standards, resulting in systems producing significant energy savings in the real world. The second articles in this series will examine how technologies are advancing to deliver more part-load energy savings.

To read Part 2 of this article, visit https://coolingbestpractices.com/industries/hvac/advancing-standards-and-compressor-technologies-can-capture-more-part-load-energy.

About the Author
Ben Majerus is Manager, Application Engineering, at Danfoss.

About Danfoss
Danfoss engineers advanced technologies that enable us to build a better, smarter and more efficient tomorrow. In the world’s growing cities, we ensure the supply of fresh food and optimal comfort in our homes and offices, while meeting the need for energy-efficient infrastructure, connected systems and integrated renewable energy. Our solutions are used in areas such as refrigeration, air conditioning, heating, motor control and mobile machinery. Our innovative engineering dates back to 1933 and today Danfoss holds market-leading positions, employing 27,000 and serving customers in more than 100 countries. We are privately held by the founding family. Read more about us at www.danfoss.com.

All images courtesy of Danfoss.