Hospitals account for nearly 5% of the total energy use in the United States each year. The average 200,000 ft2 facility spends about $13,600 per bed, or roughly $680,000 annually, on energy costs. Why so much? Operating twenty-four hours a day, thousands of employees, patients, and visitors cycle through campus buildings daily. Additionally, hospitals maintain high ventilation rates to lessen the risk of microbial contamination; the conditioning requirements of this outdoor air represents significant energy usage.  Lastly, the use of sophisticated imaging equipment, electronic health record systems and other operations generates heat that must be compensated for via the site’s cooling load.

Hospital cooling, therefore, bears the brunt of this utility usage as chiller plants are the single largest consumer of energy in most health care facilities. This consumption can be made even more extreme if the system is not designed to operate at its maximum efficiency. 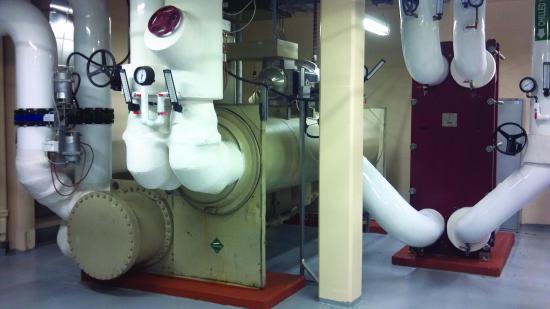 It is no surprise then that hospital operations teams are continually seeking to improve energy efficiency and reduce operating costs. While regular and scheduled HVAC maintenance, daylighting, and automatic controls or sensors can reduce energy costs, these low-hanging fruits eventually get picked.  Optimizing the chiller plant is one of the greatest means of short and long-term reduction of energy use for large health care systems. Such was the case with a Northeast hospital that wanted to save on utility costs and use less water.

A leader in virtually every area of medicine, a Boston-area hospital has long been the site of pioneering breakthroughs that have improved lives around the world. A nearly 800-bed teaching affiliate of a prestigious medical school, the facility is recognized internationally for its excellence and innovation in patient care, biomedical research, education, and training. Knowing that chilled water production was a major energy user, the operations and energy team sought the assistance of outside consultants to help them navigate the world of energy optimization solutions.

Having reviewed tekWorx successful energy optimization projects elsewhere, the hospital project team commissioned tekWorx to perform an energy audit on the hospital’s cooling system.  The comprehensive energy audit gave the hospital a clear picture of the existing system. Specifically, the audit assessed how the cooling system and equipment were being used, how these systems and machines either did or did not work together, how current operation strategies were impacting energy performance, and what pragmatic solutions could be implemented that would both reduce consumption and pay back quickly.

The 2,400-ton chilled water plant was designed in an efficient Variable/Primary configuration but the chilled water supply temperature setpoints and condenser water supply temperature setpoints were both set to static points all year, regardless of actual conditions. The audit also showed that while the chilled water pumps were variable speed, they were observed on‐site to be operating as constant speed pumps. This excess flow was wasting pump power and added unnecessary head to the system. An Invensys building automation system (BAS) controlled all chilled water plant equipment. While in relatively good condition, it lacked an optimization sequence. 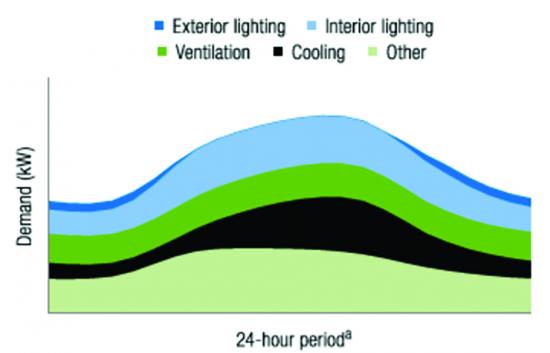 Profile of electricity consumption at the hospital.

tekWorx installed its Xpress® solution, a combination of adaptive control algorithms and Tridium Niagara N4 hardware, to optimize the hospital’s chilled water plant equipment in real-time. These optimization algorithms continuously adjust equipment sequences and key setpoints based on such parameters as occupancy level and outdoor temperature to continually maximize the system efficiency while maintaining space cooling conditions throughout the hospital, including operating rooms.

The hospital elected to integrate the tekWorx Xpress® system with the Invensys BAS utilizing a local, on-site BACnet-based supervisory architecture. In this implementation option, the BAS remains physically connected to all operating equipment (chillers, pumps, cooling towers, valves, etc.) and instrumentation such as flow meters, temperature and pressure sensors, and kW sensors.

Xpress® and the Invensys system work together in two operating modes to control and optimize the hospital’s cooling system operations- Local Control Mode and Optimization Mode. While in the Local Control Mode, the BAS uses its existing “make-it-work” control program to operate the cooling system in the same sequence as it always had with no efficiency input from Xpress®. When the Optimization Mode is active, the BAS continuously sends operating equipment data and process signal values to Xpress® for use in its patented optimization algorithms to calculate operating equipment sequence instructions and setpoints that maximize overall system efficiency (minimize kW/ton). These instructions are then sent to the BAS which executes the corresponding control instructions. Xpress® built-in communication watchdog, system heartbeat, and bumpless transfer functions ensure safe and seamless transition between these modes. In the event of a maintenance override or a communication interruption, the systems automatically revert to Local Control Mode so that the BAS program continues to operate the system and produce cooling until the fault is cleared or the maintenance is completed.

The hospital selected the Xpress® supervisory architecture because it ensures the cooling system reliability that is so critical for a facility with 24-hour patient needs, including operating rooms, that may be pressed in to service at a moment’s notice. At the same time, this architecture simplifies the BAS integrator’s task and maintains use of the existing sequence which has already been tested. The Xpress® user interface makes all optimization-related parameters accessible for any future service, and it provides operators with a both historical and holistic views of system performance.

An example of the equipment sequence optimization instruction might involve Xpress® telling the Invensys BAS when to add or remove a chiller so that all operating chillers will run at their most efficient operating points. The BAS corresponds by controlling the valves and pumps and monitors the flow/pressure signals' values to verify the minimum condenser and evaporator flows before turning the chiller ON or OFF. In an example setpoint optimization instruction, Xpress® sends a new setpoint to adjust the remote differential pressure for the hospital’s chilled water distribution loop based on real-time conditions. The Invensys system then uses the new setpoint in its PID loop algorithm to control the pump speed to achieve that optimized setpoint. Xpress® optimization instructions continuously work with the existing BAS system and equipment to minimize the hospital’s overall system kW per ton. 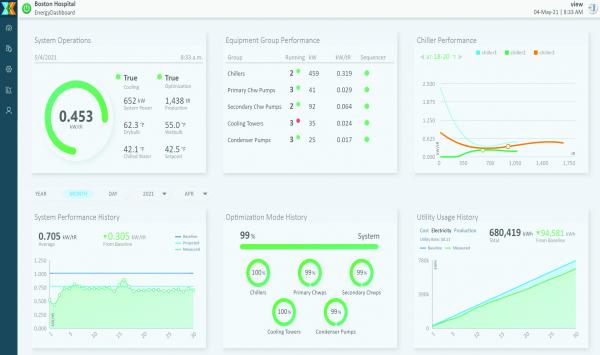 Energy consumption dashboard at the hospital. Click to enlarge.

In addition to the control updates, the other major factor in this efficiency upgrade was the implementation of the Xpress® Energy Efficiency Dashboard. Many hospitals are built over time, creating a mixture of fixtures, equipment, management systems and documentation. As a result, getting a clear window into real-time operations can be difficult. The hospital staff can now clearly view Key Performance Indicators (KPIs) such as kW and kW/ton performance for each piece of major equipment as well as those of the total chilled water system in one, single interface.  In addition, the operations staff can customize these KPIs to address their needs.  Real-time energy performance can be displayed relative to historical data and trending capabilities to provide staff with an instant look at the long‐term view of system performance. This interface also allows the hospital team to have an instant snapshot of energy consumption, power consumption and utility costs to better understand usage and identify energy waste and equipment problems.

The seamless implementation of Xpress® has reduced the facility’s cooling costs by a third annually while earning the site a $31,000 utility rebate. With a simple payback of one year, the initial project outlay was quickly re-invested back into the institution to finance investments in improving patient care and other more capital-heavy facility needs.

In addition to dollars, this project has had a profound environmental impact. Meeting all cooling demands but with less energy, the campus has significantly decreased its carbon footprint. The operations team estimates that two hundred metric tons of CO2 emissions were saved in the first six months of operation while more nearly two million gallons of water will be saved per year.

Energy retrofits at the hospital have dramatically reduced energy consumption and cut maintenance costs, all while improving equipment lifetime and correcting deferred maintenance problems. The Xpress® system is no exception. In addition to significant energy savings, the system also provides the operations team with real-time energy data for all chilled water equipment. Understanding how energy is used can help quickly identify energy waste and equipment problems, as well as overcharges and errors on energy bills. Xpress® also acts as an early warning system, sending emails or texts to staff when equipment such as a fan, pump or chiller is operating outside expected parameters. Facilities and operations staff are also freed up for other tasks, increasing their bandwidth and response time.

Consistently ranked by U.S. News & World Report as one of America's Best Hospitals, this campus has long been a proponent of progress and technological advancement. Expanding that focus to energy consumption has not only helped the hospital operate more efficiently but allows the site to continue offering cutting-edge care with a lesser environmental impact.